This year marks the 60th anniversary of the Universal Declaration of Human Rights which was signed in the Palais de Chaillot on December 10th, 1948. For France, celebrating this anniversary presents an opportunity to stress once again the truly universal dimension of Human Rights. Therefore, I want to pay a tribute to all the men and women, especially those from civilian society, who are committed to the protection and promotion of Human Rights.

On this Bastille day, I would also like to pay tribute to the American veterans of World War II, these true heroes, who liberated my country in 1944. They are part of the American legend, and for those who are still with us today, they deserve to be recognized for their deeds. A few years ago, the French government decided to do so by awarding to the bravest the Legion of Honor, France’s highest distinction.. Many of these great men and women are children of the Midwest, and during the 17 months I have spent in the region, I have had no greater reward than being able to honor these heroes from Illinois, Indiana, Missouri, Michigan, Minnesota, as well as other states.

These men fought on foreign soil because they believed in Freedom, Justice and Fraternity - values that our two nations have shared since the XVIIIth century, when the United States and France established the first two great Republics of modern times. How uncommon is the bond between our two countries ! We share the same political principles, the same adherence to Human Rights, but our respective histories could not be more different. France was created and unified by the Kings long before the century of Enlightenment. The United States is a country of pilgrims, explorers, and immigrants, who rose from the status of a colony to what it is today, a great power and a great democracy. For the last two centuries, our societies have been preoccupied with markedly different issues. But even if our respective paths may have been different, we have been united by the ties of a lasting friendship. This friendship between our people is a precious gift that must be cherished and protected.

When we celebrated Bastille Day together last year, we acknowledged the high expectations raised by the election of President Nicolas Sarkozy about a new momentum in French-American relations. Today, as France enters the Presidency of the European Union and the United States of America prepare for exciting presidential elections, I think it is fair to say that we have been up to the task.

When President Sarkozy came to Washington and addressed Congress last November, he strongly conveyed our commitment to a renewed, , strong and secure friendship between our two countries, a message of confidence and positive energy that was warmly welcomed by all. This very visit symbolized the beginning of a dynamic new era in our vital and long-lasting relationship.

Today, this unique and fruitful relationship is in excellent shape, allowing the United States and France to resolutely confront the main challenges and great issues of the 21st century.

From a global perspective and in very practical terms, it is united, that we must defend our common values and ideals of freedom and democracy. If we want to succeed and efficiently assume our responsibilities in World affairs, we must together fight terrorism and the risks of nuclear proliferation. It is together that we must convince Iran to choose cooperation and dialogue. It is united that we must help the people of the Middle East find the path to peace and security. It is together that we must remain engaged in Afghanistan, where France has recently stepped up its efforts to support NATO’s forces and its allies. And in Iraq, we also share the same goals. On all these issues, as well as in Sudan and its neighboring countries or in the Balkans, our nations are actively engaged and are cooperating to build stability.

In the same spirit, NATO and the European Union, which share a common destiny, could and should work better and more closely together. We do appreciate the United States’ openness to France’s proposal to rejoin NATO’s integrated command structures, and to resume its full role, allowing its relations with the Atlantic Alliance to evolve concurrently with the development of a credible European Defense.

Tonight, I would also like to convey the message of France as a country ardently willing to embrace the future. In May 2007, the French electorate went en masse to the polls, and gave a clear majority to the candidate who, in their view, had made the strongest case for change.

Over the past 14 months, a significant set of reforms have been implemented under the authority of Nicolas Sarkozy and his government, led by Prime Minister François Fillon. For instance, the Parliament has passed a law granting autonomy to the Universities and authorizing them to organize their own fundraising. It also passed a tax reform introducing a cap on the percentage of revenues anyone can be taxed. The 35 hour-week framework has been overhauled. The notoriously difficult issue of the special pension system for some public companies has been solved. More flexibility has been introduced in the work place, and employability has been promoted in cooperation with social partners, who where able to hammer out an agreement satisfactory to all parties.

The polls have continuously shown that the French opinion is welcoming these reforms.

Reforms are also at the forefront of the EU’s agenda. As you know, the ratification process of the treaty of Lisbon, which is an important step toward a stronger, more cohesive, Europe, has been delayed by the Irish ‘no’ to the treaty. As the consequences of the referendum are hard to assess at this stage, the European Council has decided to go on with the ratification process, giving time to the Irish government to come up with suggestions on how to deal with the situation. This is not, however, the first time that difficulties have risen in a ratification process - France knows something about it - and difficulties have always been overcome in the past. As a next step, President Sarkozy will travel in the coming days to Ireland. He has also made clear that he remains firmly committed to the priorities identified by the French presidency : climate change, energy security, immigration, agriculture and defense capabilities.

The past year has also been a good one for the relations between France and the Midwest, and the great city of Chicago.

The visit of Mayor Daley to Paris, last September 2007, was very well received in France. It was intense and fruitful. Mayor Daley met with the Mayor of Paris, Mr. Bertrand Delanoe, French Senator Giraud and the Minister of Economy, Finance and Employment Mme Christine Lagarde. The sister City agreement between Chicago and Paris was extended for a second period of ten years.

Another highlight of the trip was the introduction of the Velib to Mayor Daley, who seemed to enjoy this environmentally sound concept. For those who are not familiar with the Velib, let me bring you up to speed - it is a user friendly rent-a-bike system, which has spread throughout Paris. Adapted to the needs of Chicago, I am convinced, as Consul General and a downtown resident, that the Velib would be great for the city.

So, if you embrace our bike system, what about a faster way of transportation ? You may also love our high speed trains ! Wouldn’t it be wonderful to commute smoothly between Chicago, Cleveland, St Louis, Detroit and Minneapolis as we do between Paris, Lyon, Marseilles, Bordeaux, Brussels and London ?

Another great opportunity to celebrate the strong ties between France and Chicago, was Christine Lagarde’s visit to Chicago a few weeks ago. The Minister met with local economists, visited the newly merged Chicago Exchanges and explained her vision of ‘France on the move’ at a luncheon hosted by the Chicago Executive Club. Before Mme Lagarde’s visit, French Ambassador, Pierre Vimont, delivered a warmly received speech on France’s policies and priorities under President Sarkozy during a special event hosted by the Chicago Council on GlobalAffairs.

Over the past 12 months, significant progress has also been made to promote our educational and scientific cooperation as well as our economic presence in the Midwest.

For a few years now, the Consulate of France has developed a close and mutually beneficial cooperation with Chicago Public Schools. One of the (many) positive outcomes is the significant increase of American students studying French, both at the elementary and high school levels.

The relations between regional French Academies and four Midwestern States, Indiana, Kentucky, Nebraska and Wisconsin, have also been reinforced.

In the same spirit, the France Chicago Center, a foundation created in April 2001 between the University of Chicago and the French authorities, is prospering in humanities, social sciences, biology, physics and mathematics. A new project, named France and Chicago Collaborating in the Sciences, or FACCTS, has been launched in 2008 with an annual budget of $ 100,000.

Beyond the France Chicago Center, several scientific partnerships have been agreed upon, such as the MOU (Memorandum of Understanding) between the French Commissariat à l’énergie atomique (French atomic energy commission) and the Fermilab Institute. Turning now to France’s economic presence in the Midwest, Veolia, a major French company recently announced its decision to set up its US headquarters in Chicago. A steady flow of small and medium-sized companies are establishing a presence in the region, with a special focus on Chicago and Detroit. In addition, significant investments have been made by big French companies, such as Louis Dreyfus in Indiana and Saint-Gobain, in Ohio.

Lastly, I would like to extend my warmest and sincere appreciation to the French companies which have supported the organization of this Bastille Day event : Air France, Axa Assistance, Credit Agricole Asset Management, Schneider Electric and Evian. These successful companies share common characteristics : they are global in their thinking, recognized leaders in their field of competence, and responsible corporations actively interacting with local communities wherever they do business. I am proud of their presence tonight, and again thank you.

I’m also proud of our great institutions, the French Lycée, the French-American Chamber of Commerce and the Alliance Francaise who are daily developing their activities and their ties with the local community.

With this, I thank you all for your attention and I invite you to celebrate. 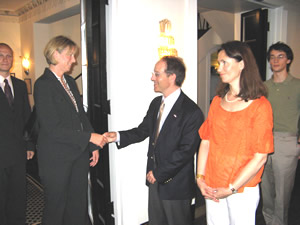 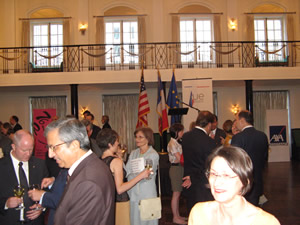