A high standard of bilingual education in French, the LabelFrancÉducation is now in high demand.

Over 1.7 million students worldwide are now studying French as a second language. This dynamic statistic is excellent information for parents of bilingual students who see in this statistic, potential professional opportunities for their children. By offering an immersive course of French study (3-5 hours per week in average) as well as non-linguistic classes in French, bilingual courses are at the cutting edge in educational practices and in French language certifications.

In this context, the LabelFrancÉducation which is awarded by the French Ministry of Foreign Affairs (est. 2012) fosters the development of these bilingual courses. They stand out by their quality and are instrumental in the construction of a worldwide network. Since 2012, this distinction has grown exponentially from 17 establishments to 91 in 2015 and will surely exceed 100 in 2016 on all continents. 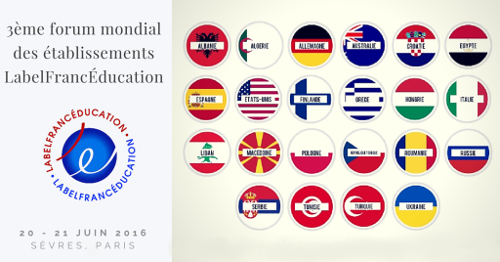 The forum in June will showcase LabelFrancÉducation and strengthen its high quality approach in a now worldwide network.

The Ministry of Foreign Affairs has organized a gathering in Paris in partnership with the agency for French Courses Abroad (AEFE), the International Center of Education Studies (CIEP), the French Institute (IF) and the Senate. This forum will take place on the 20th and the 21st of June 2016 at the International Center of Educational Studies and at the Palais du Luxembourg. It will bring together more than 100 representatives of notable educational establishments and will be honored by the presence of Lebanon’s Director General of Education, Mr. Fadi YARAK who will highlight the growing attraction of French bilingual courses.