The Awards Towards Excellence Scholarship Ceremony

On May 26th, the Alliance Française de Chicago and Consul General of France Vincent Floreani honored the students laureates of the Educational Outreach Program “Award Towards Excellence”. The program is a partnership between the Alliance Française and the Chicago Public School and serves 50 students a year from six public high schools throughout Chicago. 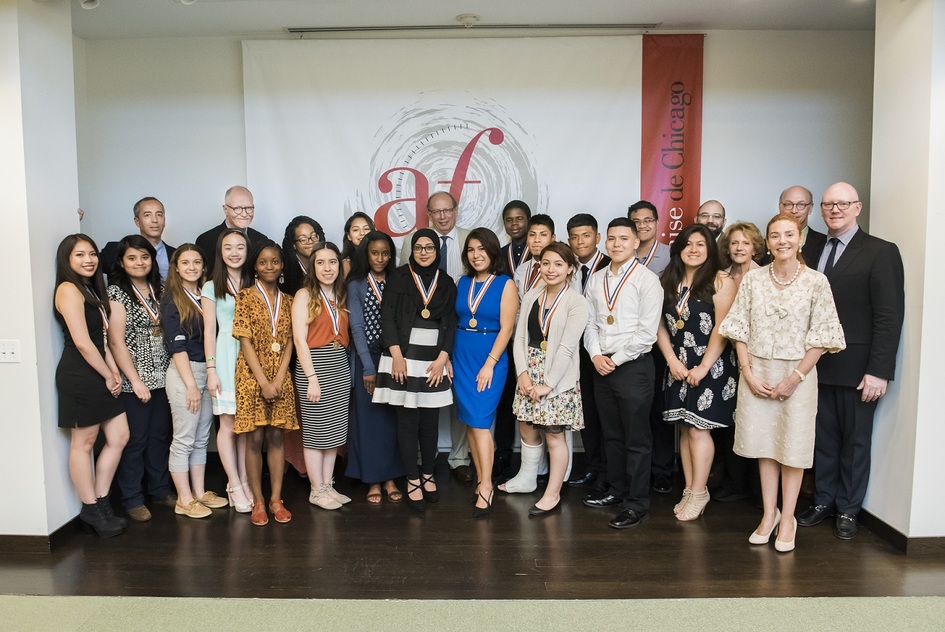 Speech by Consul general of France Vincent Floreani.Chicago, May 26th, 2016.


I´m the Consul General of France. I represent the French Government in Chicago and in the Midwest. My work consists of finding ways and supporting people and institutions, like to Alliance Française, to further increase the relations between France and the Midwest.

I’m glad to be with you, to honor you for your achievements in the French language and culture.

Frankly, you made the right choice.

You are learning a language that is spoken on all continents:

in the Americas, of course with Canada, Louisiana, the Caribbean islands, Guyana;

in many countries of Africa;

in the Middle-East, and in Asia.

Actually, it is an official language in more than 29 countries.

There’s an organization for the French language Francophonie with 77 members.

It may seem to be a difficult language. However, after English, French is the most-learned language worldwide.

It means that by learning French you´re able to communicate not only with native French speakers all over the world but also with people, on all continents, who, like yourselves, have studied French.

That opens new opportunities to you for your connections and travels.

For those of you who already speak Spanish, it´s pretty easy to learn French;

For those of you who want to learn Spanish, you´ll find a lot of similarities with the French language.

Finally, it´s a language that leads the French and francophone culture, from music to fashion, through theater, museums and cuisine.

So you made the right choice. I´m convinced it´s a great investment for you for your future. We congratulate you for that.

I would like also to congratulate Ms. Francine Saltoun, who is the driving force of this program. Since its inception, in 1998, it has improved young people´s lives.

Dear Francine Saltoun, thank you very much for this wonderful program.

Last year, the French government recognized your contribution and awarded you one of France´s highest award, the Médaille du mérite. We continue to value your action very much.

Lastly, thank you to Alliance Française board members, staff and teachers for making this program possible./.

More on the Program