I am Guillaume Lacroix, the new Consul General of France in the Midwest. I arrived in Chicago 10 days ago and this is my first visit outside Chicago in my new capacity.

This is actually my first visit ever to Nebraska.

Until today, I had known “Nebraska” through Bruce Springsteen and Alexander Payne. While I am a fan of both, I do not think this is sufficient…

It is a great pleasure and an honor to be with you tonight to celebrate the centennial of the Alliance Française d’Omaha.

I should say the “first” centennial, because I am confident there will be many others to come. But I am less confident that I will be there to see the next one.

It is also a real pleasure to be here because this evening is placed under the sign of culture and friendship between France and Nebraska. Your presence reflects your attachment to the French language and culture and more broadly to la vitalité des liens entre la France et les Etats-Unis d’Amérique.

Over the past years, membership in the Alliance has increased significantly. I see this as a sign of the enthusiasm to learn French and to learn more about my culture, in all its dimensions. But it is also evidence that the Alliance Française d’Omaha is dynamic and attractive.

I am impressed by the number of activities you organize to show the French culture and the art de vivre à la française. It is remarkable how you have succeeded in appealing to people of all ages and backgrounds, from French classes to cinema and book clubs, and even French cuisine lessons for kids!

If I were to tell you just two words, it would be: thank you!

In French, only one word: merci!

The Alliance Française d’Omaha is part of the large community of Alliances Françaises, throughout the globe. Each year, almost 500.000 people come to learn French in the Alliances, and over 6 million participate in their cultural activities. The Alliances form the world’s largest cultural network, present on all continents.

On that note, I have to tell you that I have a personal connection with the Alliance Française because my first job experience was at the Alliance française of Dar es Salaam, Tanzania, a few miles from here…

Today we celebrate the “centenaire” of the Alliance of Omaha. But, as you know, this year also marks the centennial of the World War 1, “the Great War”. We will never forget the sacrifice of the young people of Nebraska.

I am thinking, for example, of First Lieutenant Jarvis OFFUTT, who died in my country, who left his name to an air base here and who was the son of Bertha Offutt, a founding member of the Alliance Française d’Omaha. I am thinking also of Roscoe “Dusty” RHODES, the Captain-elect of the Nebraska football team who died in France for us.

And it is impossible for me to be in Omaha and not mentioning the sacrifice of your “Greatest Generation”, seven decades ago.

When I was a kid, I actually thought that Omaha was a city by the sea. But I have asked here: there is no beach in Omaha, Nebraska!

Glancing at a map, it is obvious that the French heritage in Nebraska has deep roots: you have places, such as Bayonne or Bordeaux. Your rivers have french names : la rivière du Loup, la rivière Platte. In Nebraska, the water is French and so is the wine !

I also read that the first recorded use of the word Nebraska was contained in a report sent by a French explorer – one of my predecessors-, Etienne Veniard, Sieur de Bourgmont, who came here in 1715. Our common history has more than 3 centuries!

To conclude, I would like to thank and congratulate Holly Richmond, President of the Alliance Française, and Anne Marie Kenny, and all the members of the board for their outstanding work. A special thanks also to Cedric Fichepain, the Great chef, his wife Désirée, Bernie Duhaime and his lovely wife Rosemary. Et merci aux artistes!

Day after day, the Alliance Française d’Omaha celebrates the French language and culture and greatly contributes to cultural diversity. I know you have many exciting projects for the future.

And I want to assure you that you can count on the support of the Consulate… at least for the next hundred years.

Bravo, thank you, and long live the Alliance Française d’Omaha! 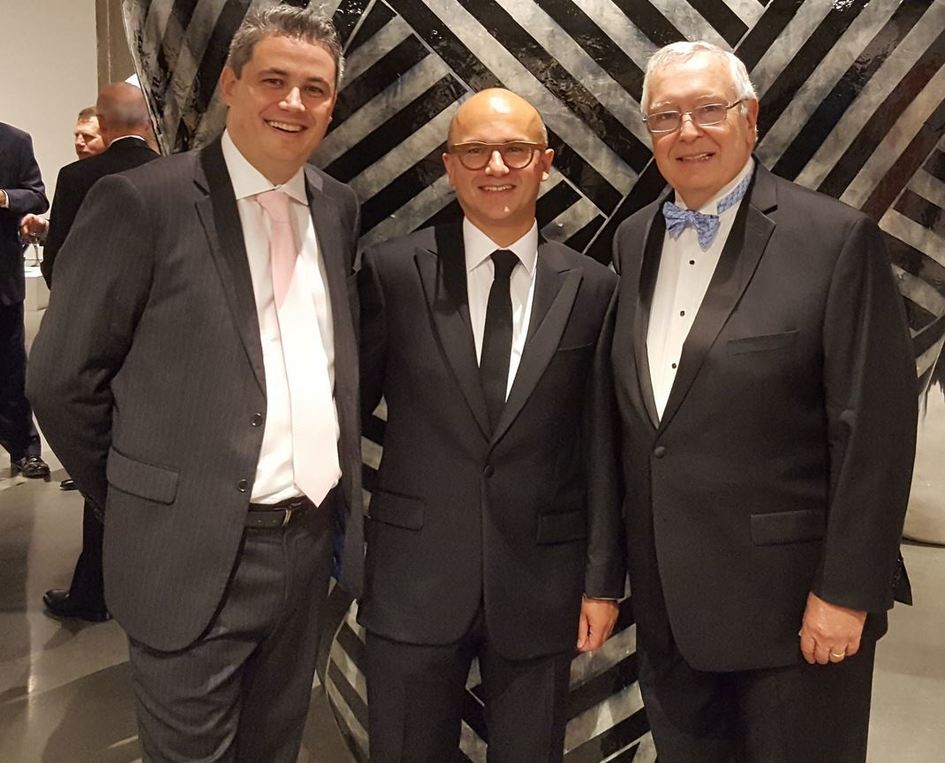