French Ambassador to the United States Gérard Araud made a special trip to Chicago to officially launch the exhibit ’Singing Stones’ curated by Palais de Tokyo, Paris. During his trip he also visited the Lycée Français, presented the Legion of Honor to world-renowned Chicago artist Theaster Gates, met with French Trade Advisors and discussed current issues with Chicago Global on Foreign Affairs’ members.

Ambassador Araud visited for the second time the Lycée Français de Chicago which is welcoming 775 students for the 2017-18 school year.

During his visit, the French Ambassador was accompanied by a French delegation including Guillaume Lacroix, newly appointed Consul general of France in Chicago; Bénédicte de Montlaur, Cultural Counselor of the French embassy; Tanguy Accart, Cultural Attaché, and Marine Reuflet, Deputy Cultural Attaché at the French consulate in Chicago. More about the visit on Lycée Français’ blog 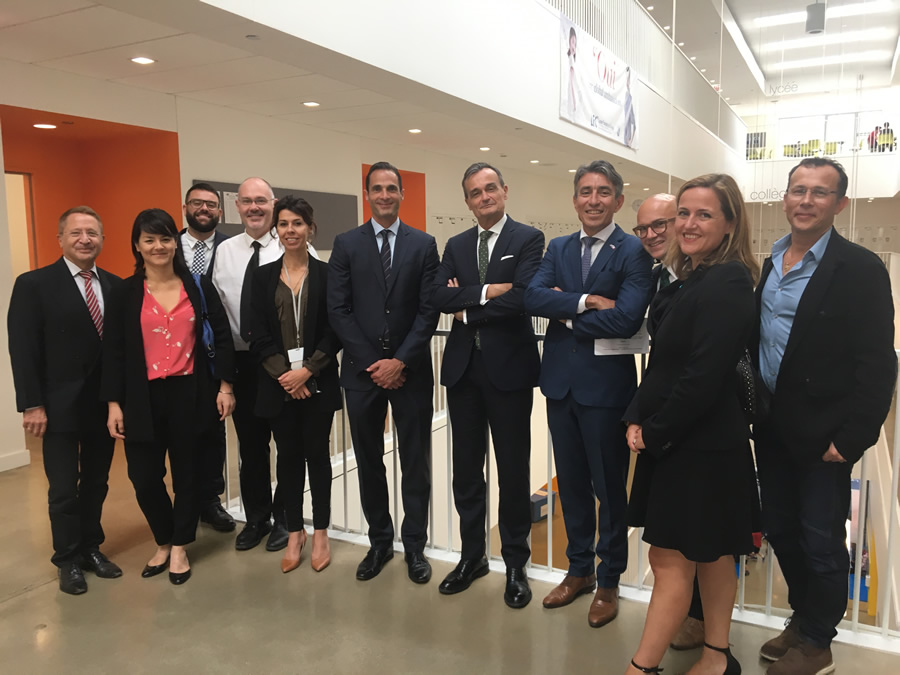 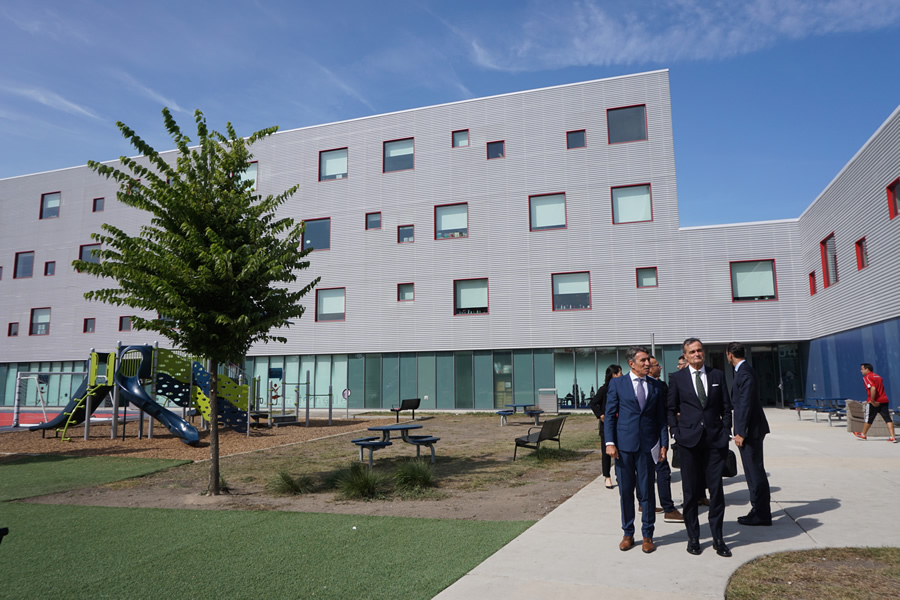 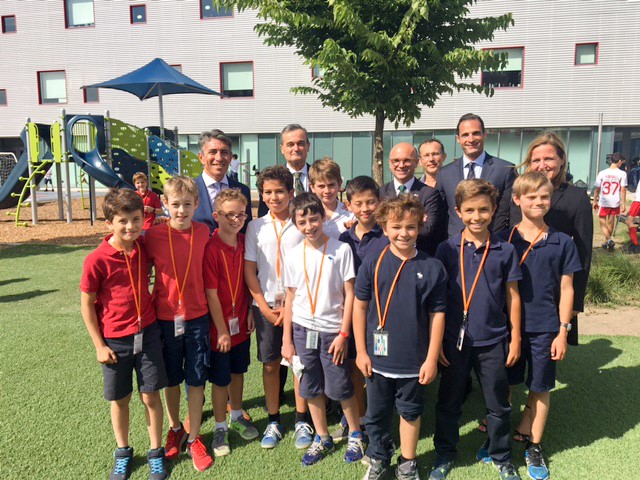 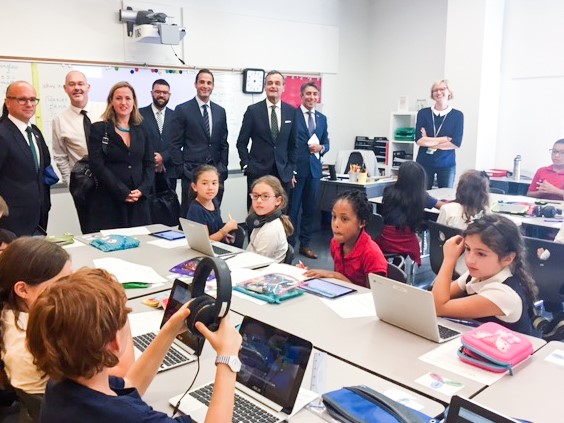 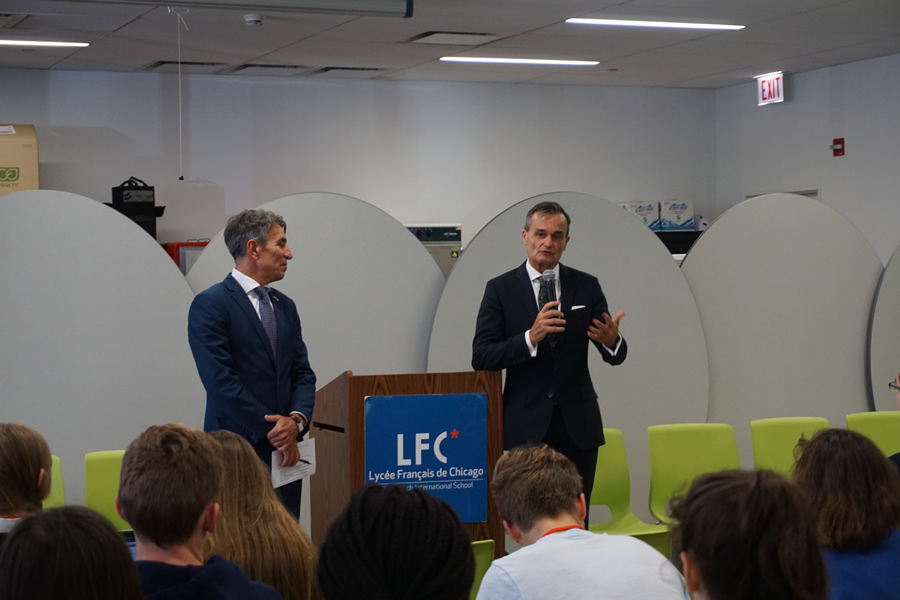 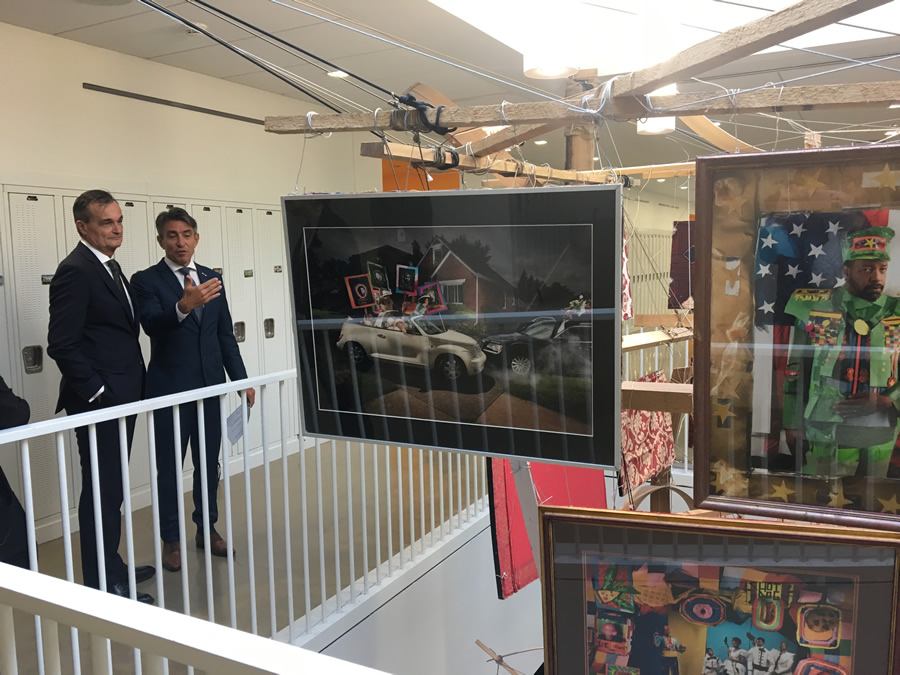 Theaster Gates is a Professor and Director of Arts and Public Life in the Department of Visual Art at the University of Chicago and the recipient of numerous prestigious international awards. Theaster Gates has been an enthusiastic partner of French cultural programs in Chicago. He has hosted the first series of the Méthode Room artist residency program conceived by French curator Guillaume Désanges in partnership with Expo Chicago in 2014. To date, four artists lived and worked in the South Side including architect Xavier Wrona who set up an exchange program between the departments of architecture of the University of Saint Etienne and the University of Chicago; curators and filmmakers Aliocha Imhoff and Kantuta Quiros who organized an exhibition titled The Government of Time in Chicago and Leipzig as well as directed the film Les impatients; artist Julien Creuzet who presented a series of photos at Document Gallery. Thanks to his guidance, new programs have been developed with other partners in the South Side: Resilient Images, a residency program with French and American photographers, at the Hyde Park Art Center and the Centre Régional de la Photographie de la région Nord Pas de Calais; and Kitihawa’s Chandelier by French photographer Nicolas Henry at the DuSable Museum.

Theaster Gates is the Founder of the Rebuild Foundation a platform for art, cultural development, and neighborhood transformation. 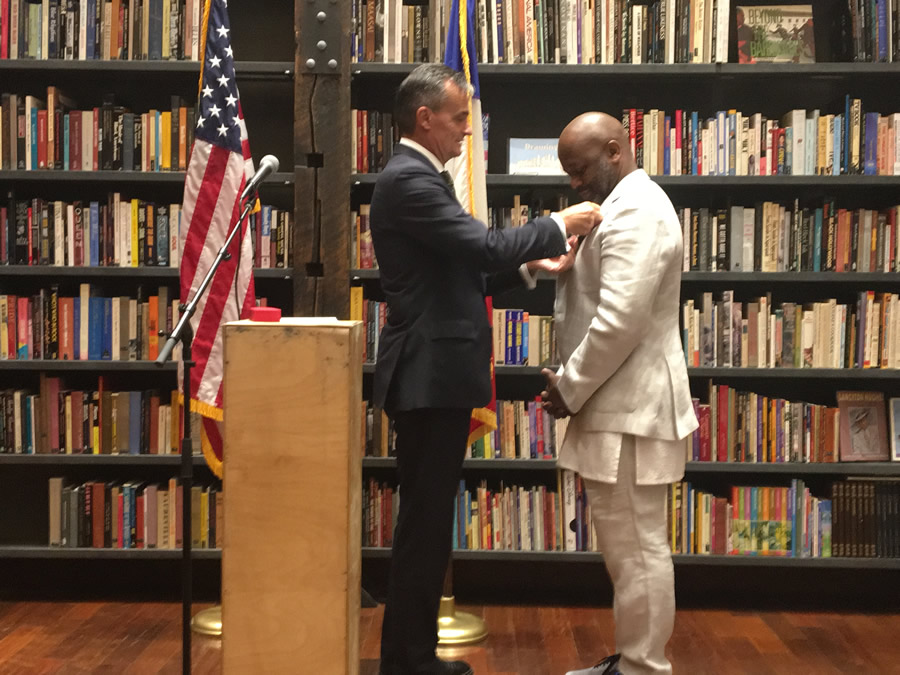 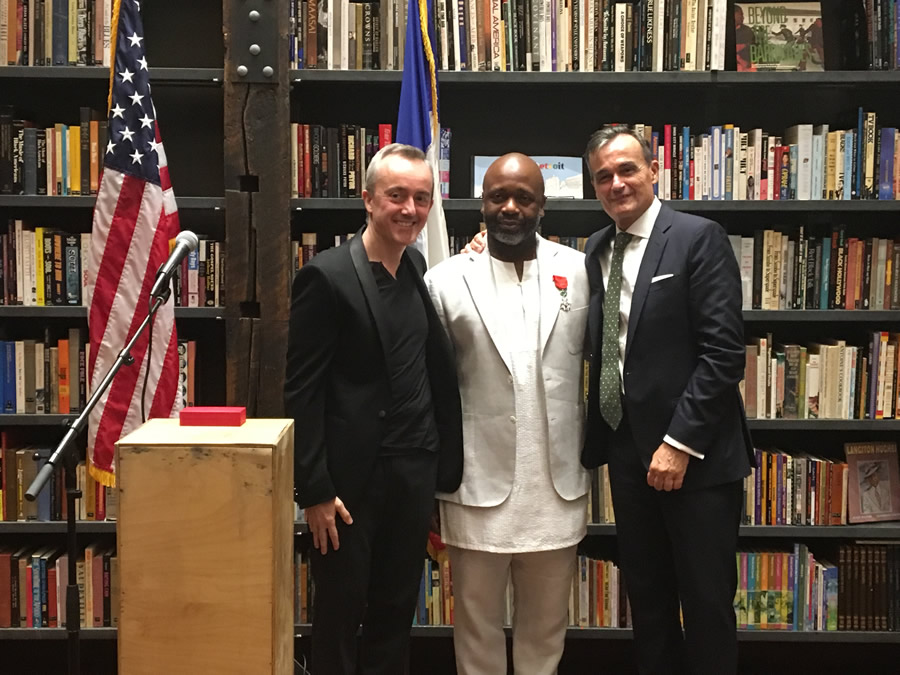 "Singing Stones", curated by the Palais de Tokyo’s Katell Jaffrès, brings together 11 emerging artists from both the French and Chicago art scenes, as part of the first Hors les Murs exhibition in the United States, in partnership with the Institut français. Presented within The Roundhouse—a 17,000 sq. ft space built in 1881 and designed by Burnham & Root—at the DuSable Museum of African American History, the exhibition presents an intimate dialogue between original productions and pre-existing works to open during the sixth edition of EXPO CHICAGO (September 13–17), and will run concurrently through the 2017 Chicago Architecture Biennial (September 16, 2017–January 7, 2018). The exhibition design involves a strong architectural component through a partnership with the Graham Foundation with Guest Designer Andrew Schachman, to collaborate with Jaffrès on a singular approach to the space and exhibition design.

The program is an extension of the French-American Curatorial Exchange initiated in 2013 with the Cultural Services of French Embassy in the United States. 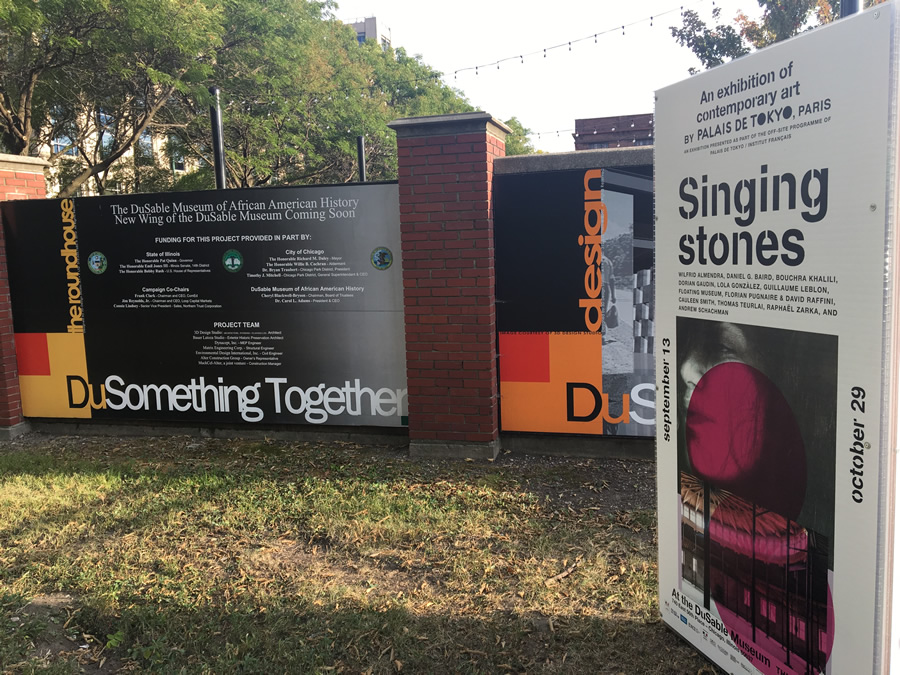 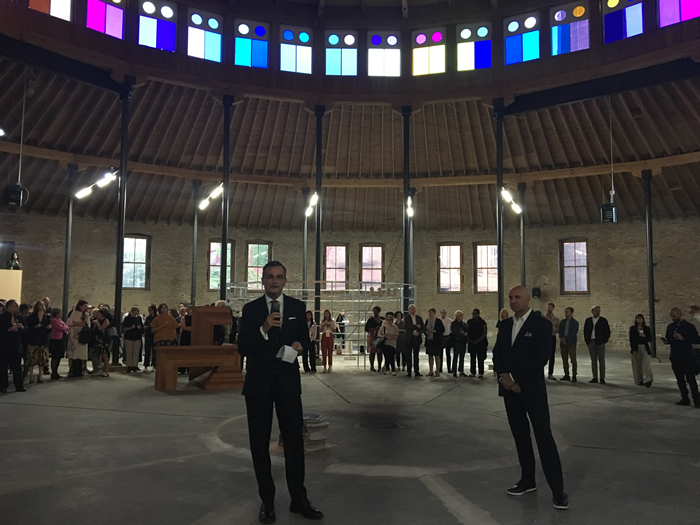 Ambassador Araud officially opens the exhibit in the presence of Tony Karman, Founder and President of Expo Chicago. 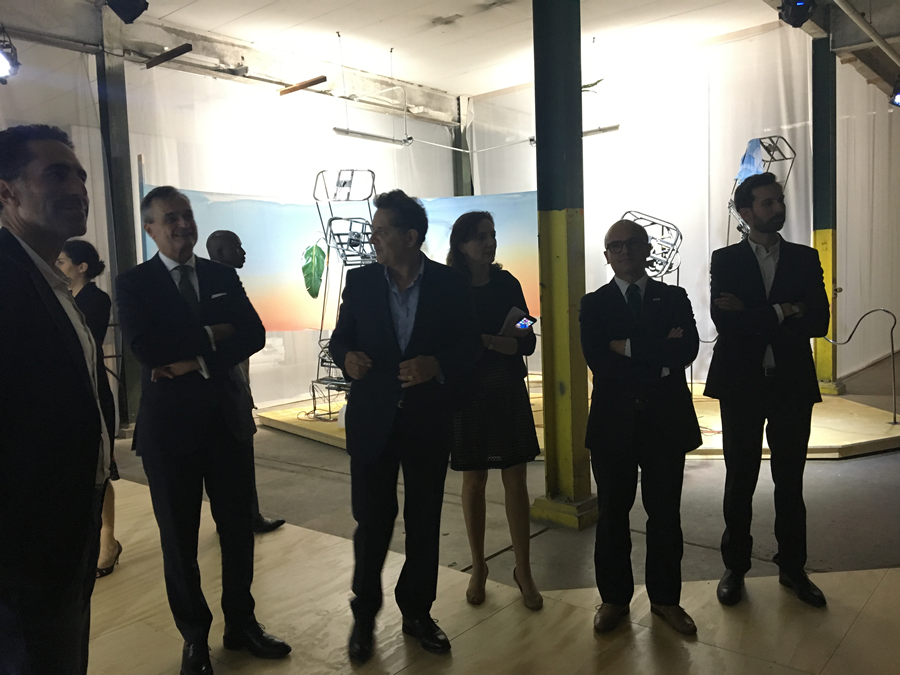 Tour of the exhibit with Jean de Loisy, President of Palais de Tokyo. 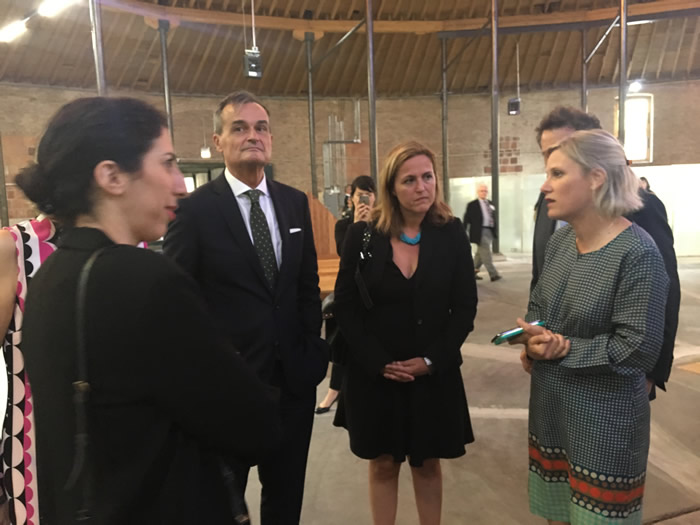 Kattel Jaffrès curator of the exhibit presents the project. 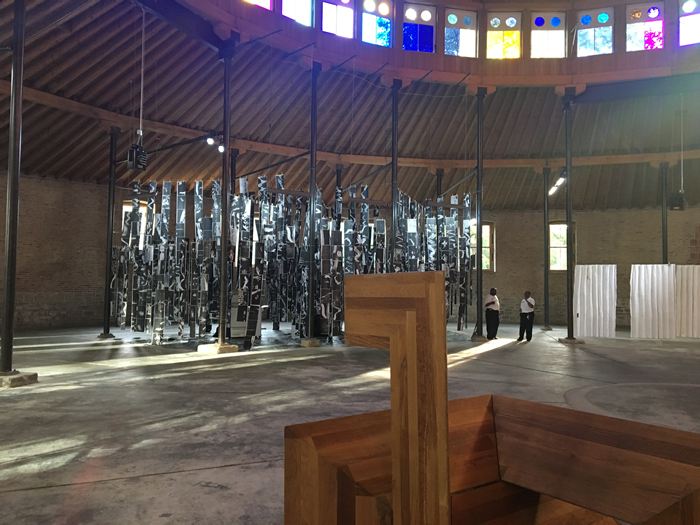