Remarks by Consul General of France, Vincent Floreani on the occasion of the presentation ceremony of the distinction of Chevalier of the Palmes Académiques to Clara Orban, Professor of French and Italian at DePaul University (May 6, 2016). 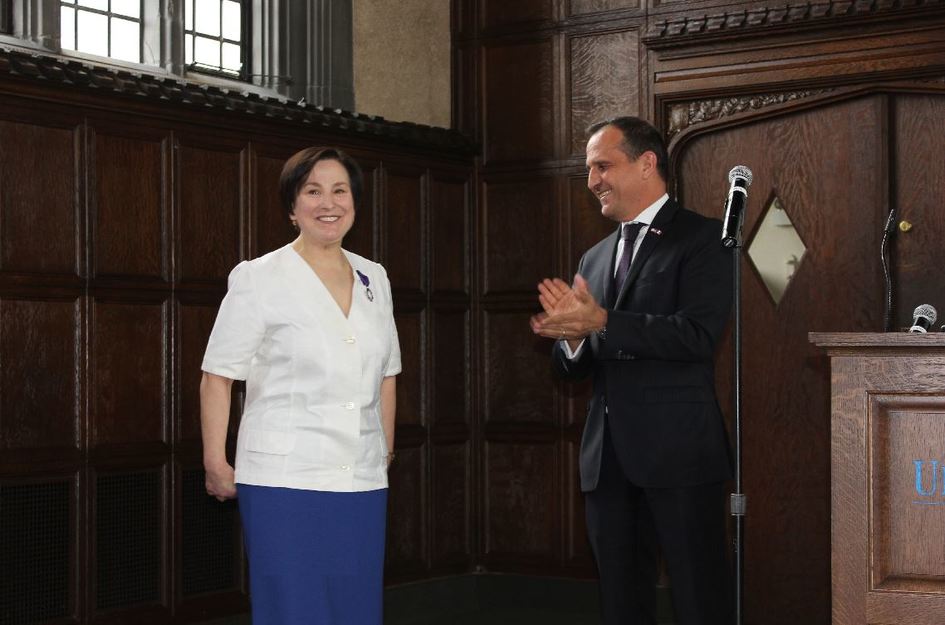 It is an honor and a pleasure for me to be with you today to award Professor Clara Orban the insignia of Chevalier des Palmes Académiques, which is one of the France’s most prestigious distinctions.

Founded in 1808 by Napoleon to reward academics, the order of the “Palmes Académiques” honors excellence in “teaching and in the development of knowledge”. It is the oldest and most highly respected award presented to scholars by the French government.

The bestowal of the Palmes Académiques outside of France is for us a declaration of admiration and of thanks to those who have dedicated much of their lives, work and talent to the knowledge, analysis and understanding of French culture. It is always a great pleasure for me to come to DePaul, a university that we value and hold in such high esteem, one with which we are always happy to cooperate with, as we did last week with a 3D and Virtual Reality master Class during the French Innovation Week.

DePaul is not only made of the great faculty but also has some of Chicago’s best students, many of whom do excellent work for us as interns. The French Consulate recently hired a DePaul student full time, an attestation to the quality of individuals coming out of your great institution.

Dear Clara Orban, your impressive career and lifelong passion for French culture and language are truly exceptional. This award is well-deserved. As the Chair of Modern Languages beginning in 2010, you have worked relentlessly to insure that the interests of the French program are best served. You have reinvigorated many facets of the department by taking on new initiatives while continuing existing projects such as the Master’s Program, which was launched in the fall of 2013 and is already exceeding enrollment projections.

Your pedagogical and interpersonal qualities are both unanimously applauded by your students and colleagues. So it is no surprise that you have received awards for pedagogic excellence. Your fields of research and teaching are extremely varied, ranging from commercial French, for which you have created a course and written a manual entitled “Au travail!”, all the way to 20th century French literature, including surrealism.

You have a secret passion for oenology, a true French adoration! You have created a course uniquely focusing on the study of wine, a course that has been highly praised amongst your students. You have also written two books on the subject. You have even obtained your sommelier certification and regularly appear on television and radio shows to present your knowledge and love for wine. I think we should seek your expertise for our French food and wine festival called “Àla Carte Chicago” in October. For the Consulate, notably the Cultural Services, you and your colleagues are amongst our most valuable and dependable university partners. In these past few years, thanks to your devotion and constant cooperation, numerous projects have been successfully realized, particularly those concerning the birth of Proust, the commemoration of the hundredth year anniversary of the start of World War I, the preparation of the Paris Summit on Climate Change, and your work the Art Institute’s collection of French surrealist paintings.

We have to continue and even further increase this partnership in the years to come. We would be delighted to include DePaul in our cultural events, such as the Fête de la Francophonie.

I myself have had the honor of participating in one of your invigorating round tables, recently organized on the theme “France and Italian Economies Today.” Dear Clara Orban,

Your devotion to a French language and culture goes far beyond these university walls. You frequently visit Chicago schools in order to promote the learning of foreign languages, especially French. You are also very active in numerous teaching associations such as the American Association of Teachers of French and the Illinois Council on the Teaching of Foreign Languages, all the while conducting numerous conferences and exchanges with your colleagues.

This prestigious award I am about to present is not only celebrating your impressive academic career but is also honoring your invaluable involvement in French culture and language.

Now dear friends, I would like to officially recognize Professor Orban for all of her accomplishments.