Home > Consul General of France is back to Nebraska to promote students (...)

On February 12-13, Consul General Lacroix made a second visit to Nebraska since taking his posting in Chicago in August 2017. The main purpose of his trip was to learn more about the existing ties between France and the State of Nebraska in the field of higher education and research and explore new avenues of cooperation in order to boost students mobility. It was also the occasion to meet Secretary of State John Gale who welcomed him to the Capitol Building in Lincoln, the State’s Capital and presented him with the certificate of Honorary Citizen of the Great State of Nebraska.

During his visit, Mr. Lacroix discussed higher education-related issues and cooperation at the University of Nebraska at Omaha (UNO) metropolitan campus, and toured several colleges. He also met with faculty, staff and students with a French connection, including faculty in the Foreign Languages department, international students from France, and students who have studied abroad in France. Finally he gave a public presentation on France and the reforms that are

“I don’t want the French people to miss opportunities,” Lacroix said. “I am strongly convinced that there are many opportunities here in Nebraska. It is my job to promote Nebraska in France and France in Nebraska.”

During his stop at the campus, Consul General Lacroix visited four state-of-the-art institutions:

the UNO Medical Center, where he was welcomed by Dr. H. Dele Davies, Senior Vice Chancellor for Academic Affairs and with whom he also visited iExcel. The Interprofessional Experiential Center for Enduring Learning (iEXCEL) is a transformative model for health care education, training and research, incorporating a wide range of simulation and visualization technologies, including augmented and virtual reality (AR/VR);

the Fred and Pamela Buffet Cancer Center, a leader in the fight against cancer for over 40 years, which is also a founding member of the National Comprehensive Cancer Network, an alliance of 19 of the world’s top cancer centers that develop standards and set guidelines for treating patients;

the Biomechanics Lab, an interdisciplinary enterprise featuring collaboration between scientists, engineers, mathematicians, surgeons and clinicians to advance the understanding of healthy and abnormal movement patterns. It is the home of cutting-edge technologies and collaborative research in areas such as biosciences, biotechnology, biomedical engineering, prosthetics, and nonlinear mathematics;

and the Barbara Weitz Community Engagement Center, a place for synergetic collaborations that offers a comprehensive student engagement program.

Finally, Consul General Lacroix met with French soccer player Ugo Trtiz, a native of Metz who has been playing at UNO since 2016. Trtiz attended Strasbourg University, played club soccer for US Jarny and for FC Metz. During his tenure with FC Metz, he earned call-ups to the U17 French National Team.

The visit at the University of Nebraska was a great success thanks to the staff and faculty’s enthusiasm and availability, and to the contribution of Katie Kresha, Business & Finance Manager, International Programs who coordinated all the communication elements of the visit. 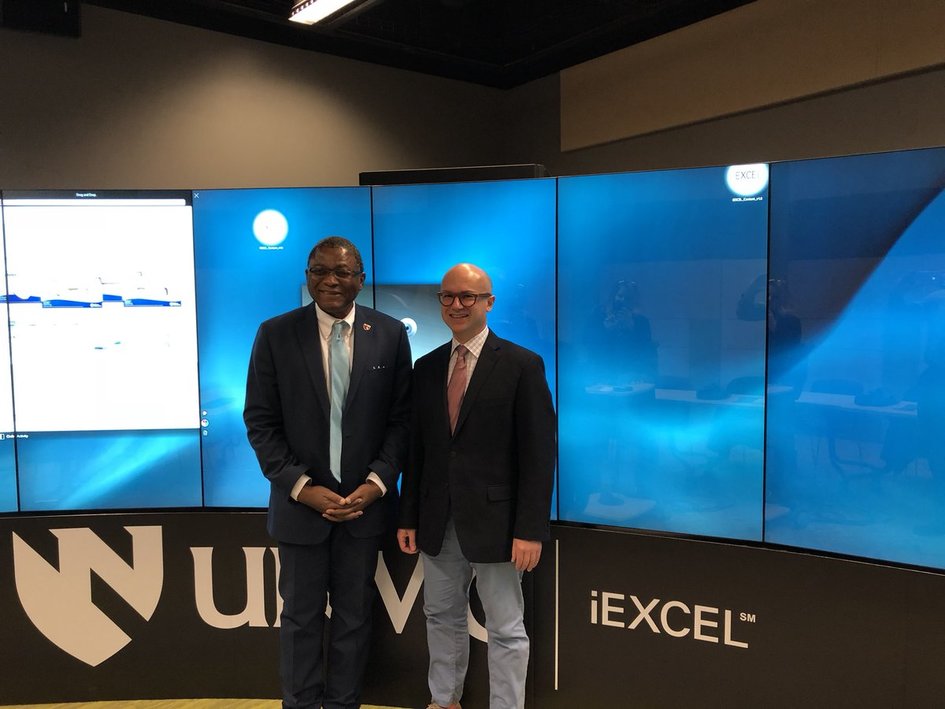 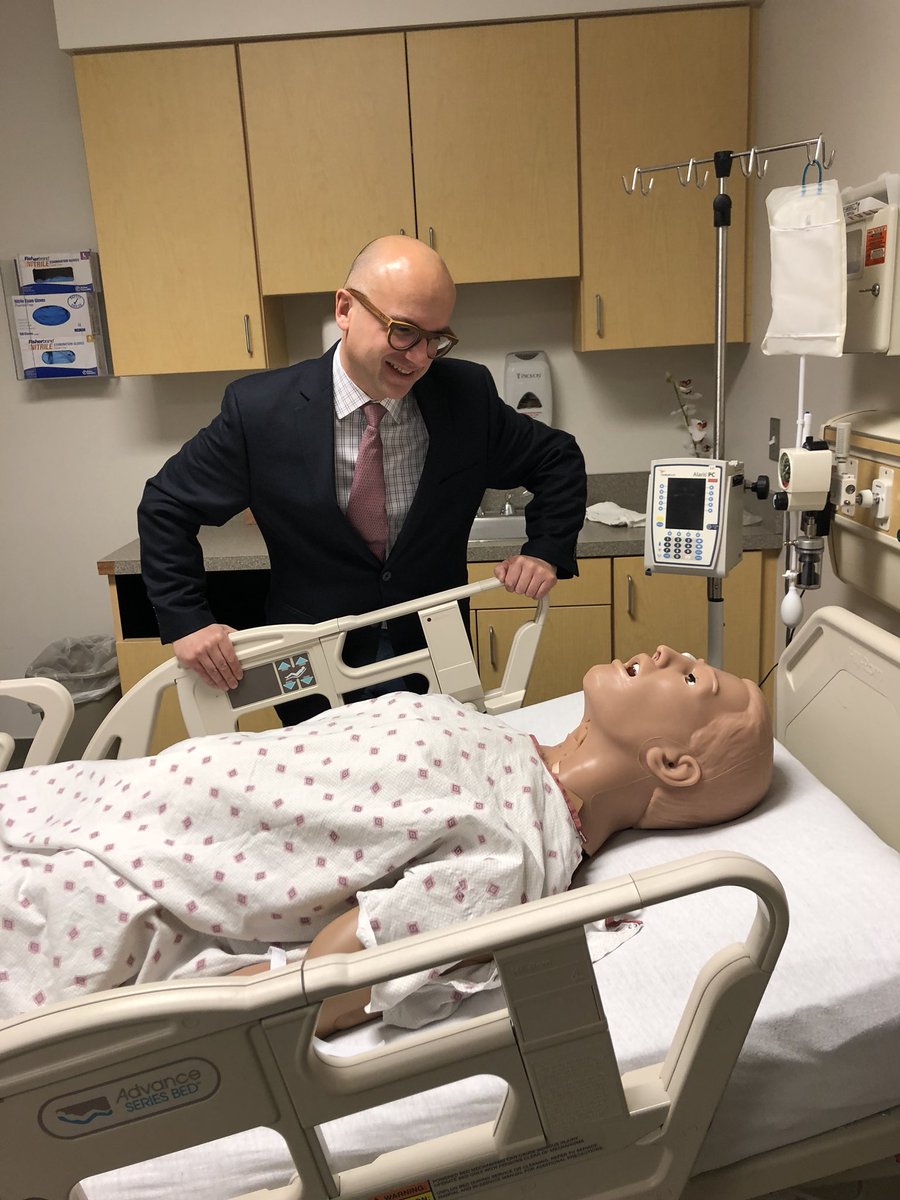 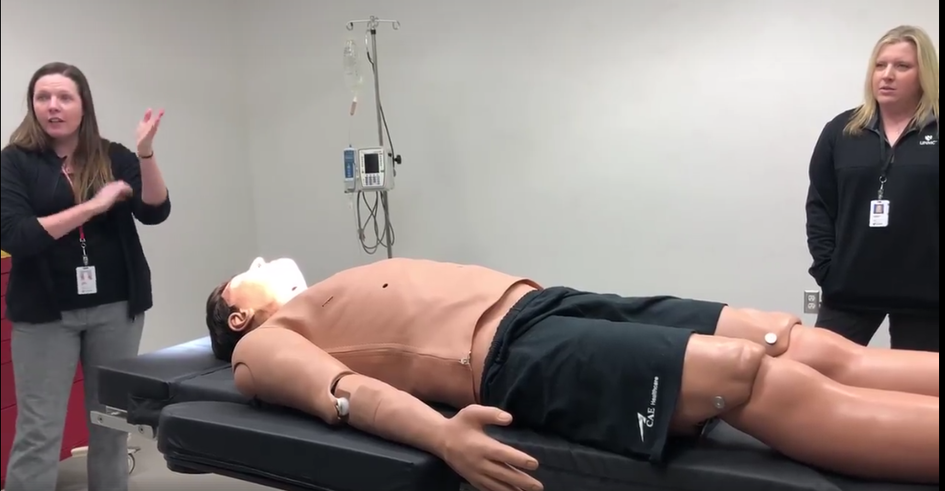 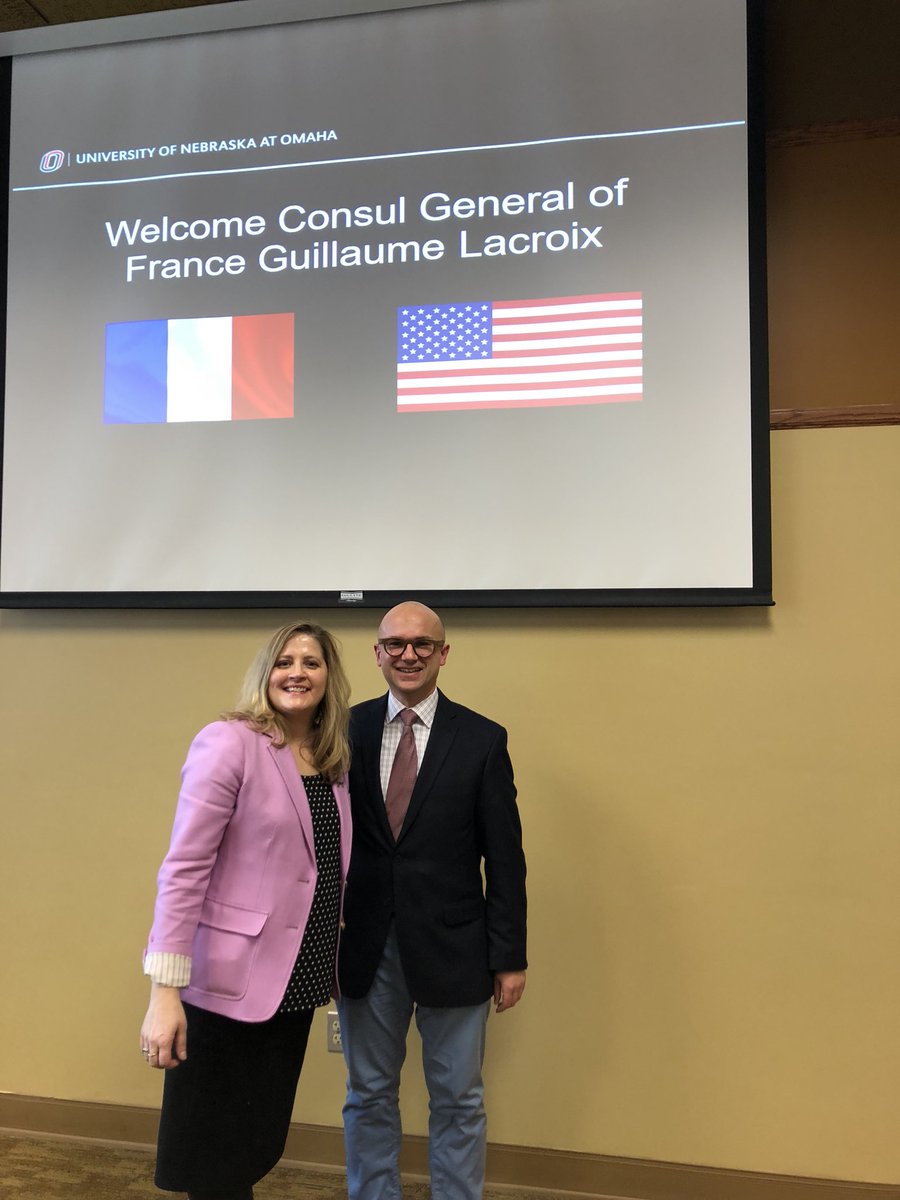 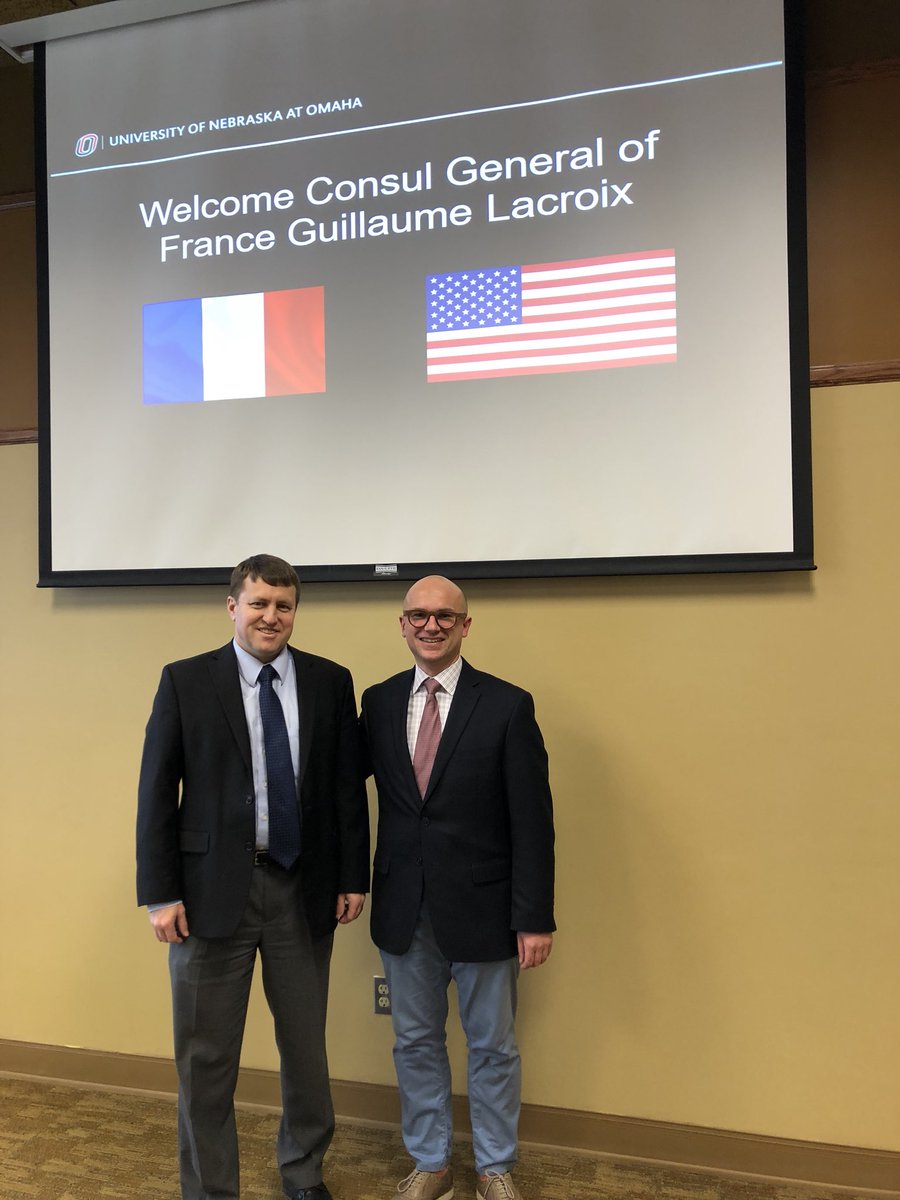 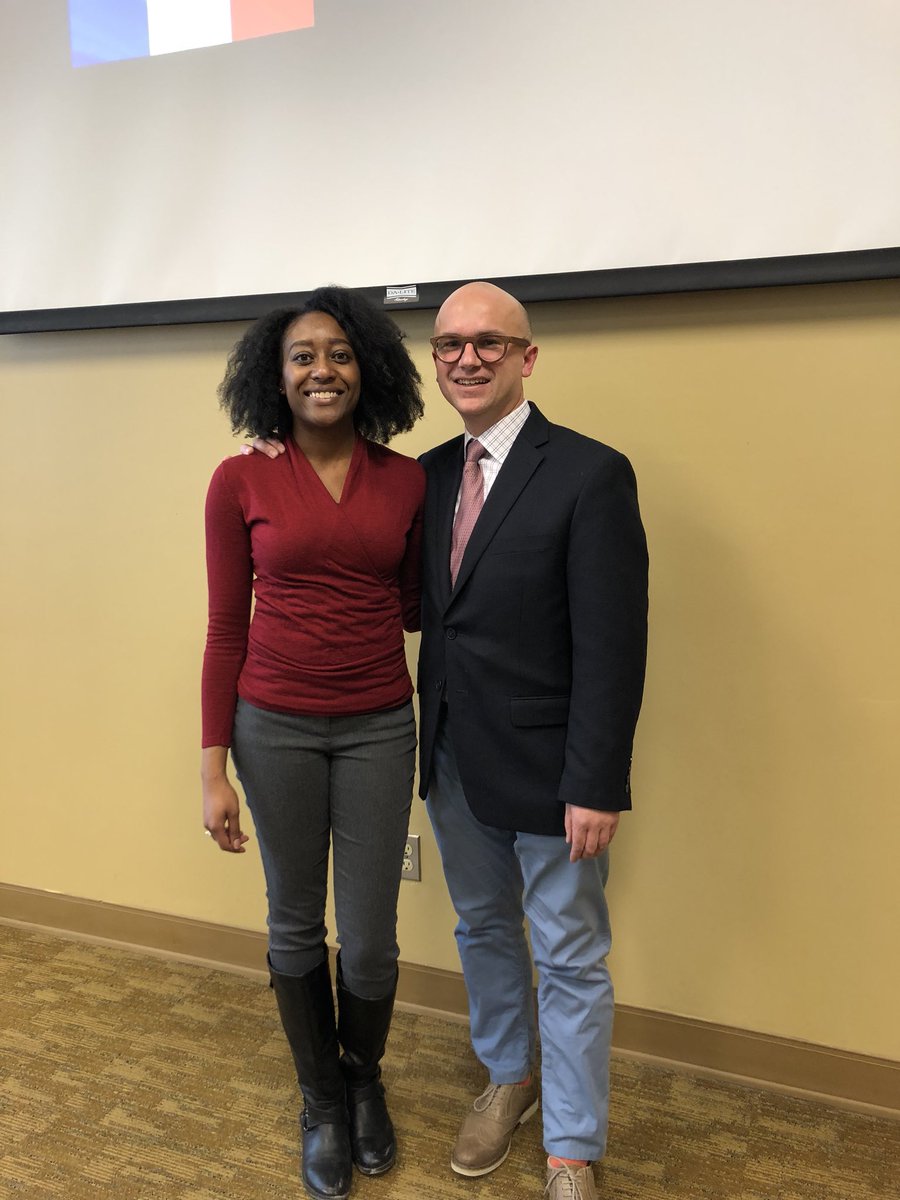 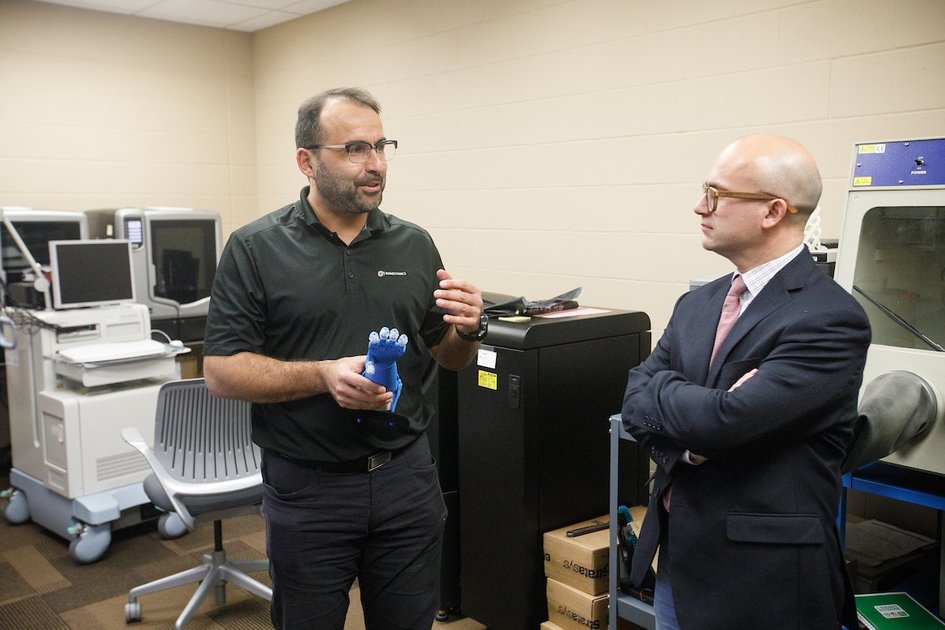 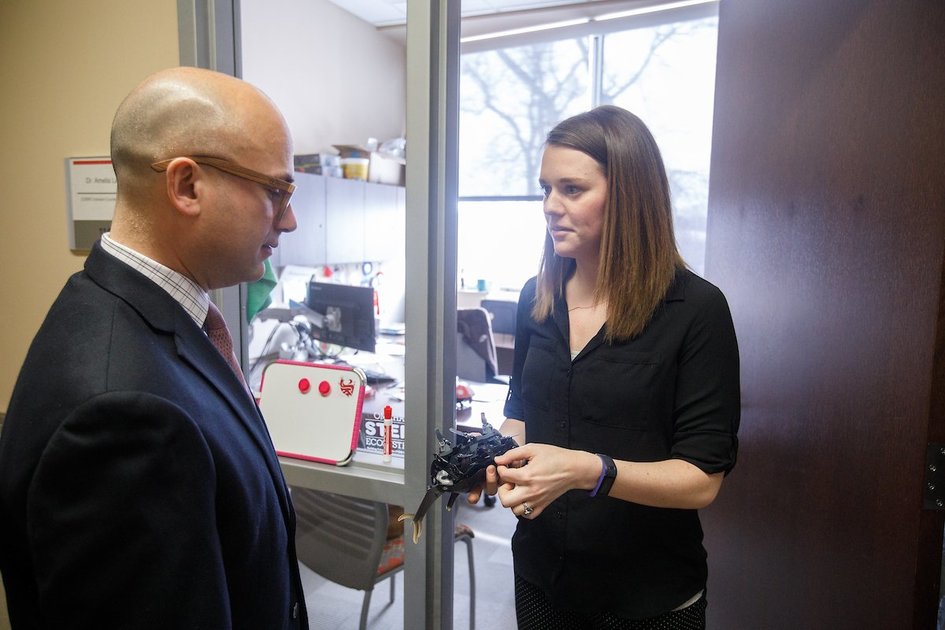 Visit of the Biomechanics Lab with Amelia Lanier, Research Associate and Outreach Coordinator. 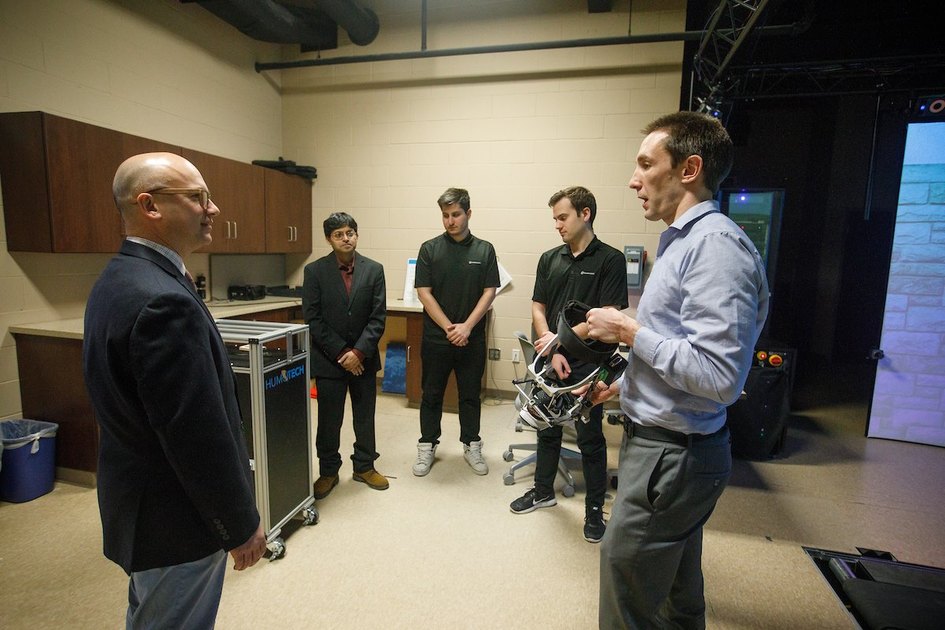 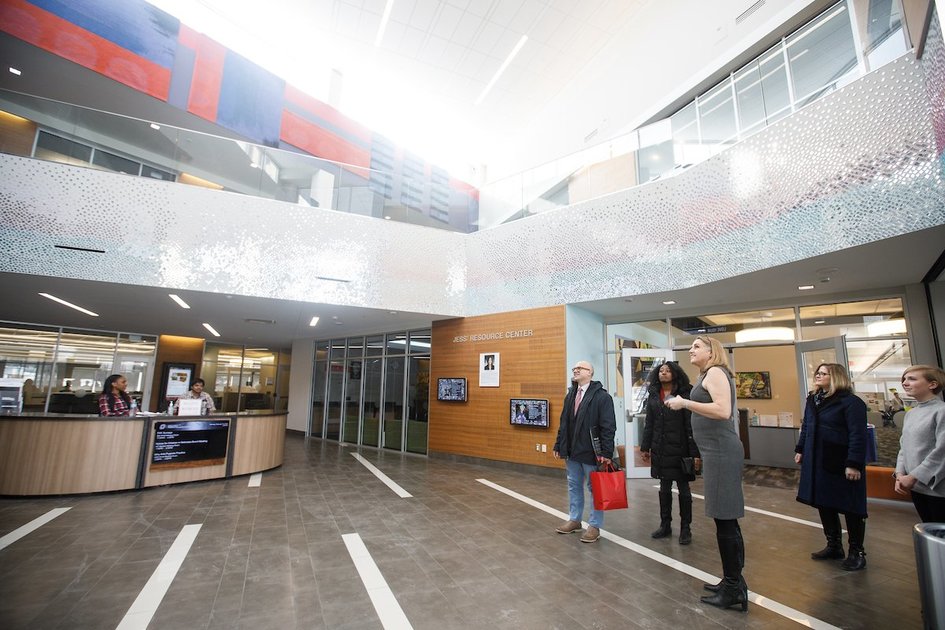 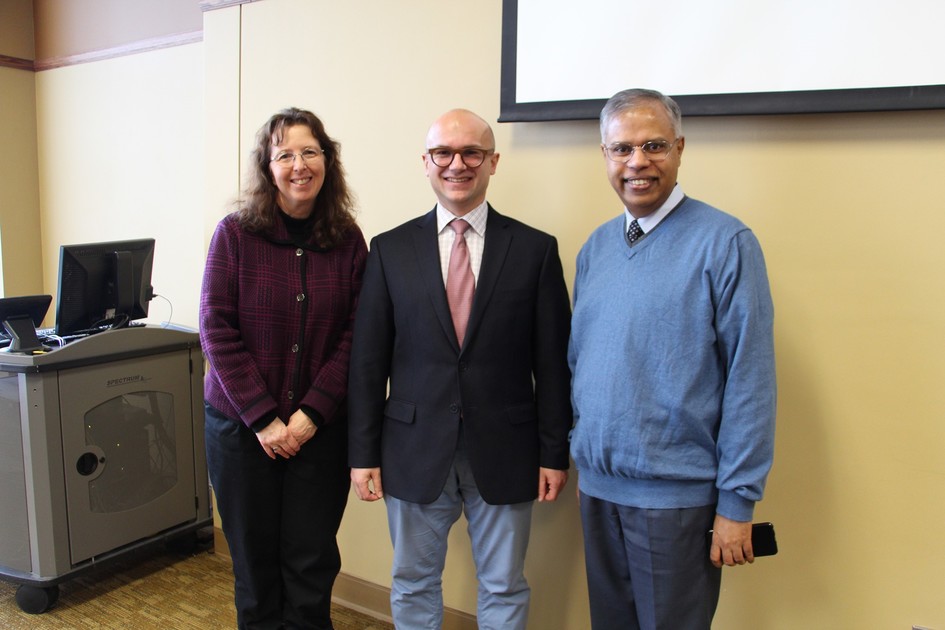 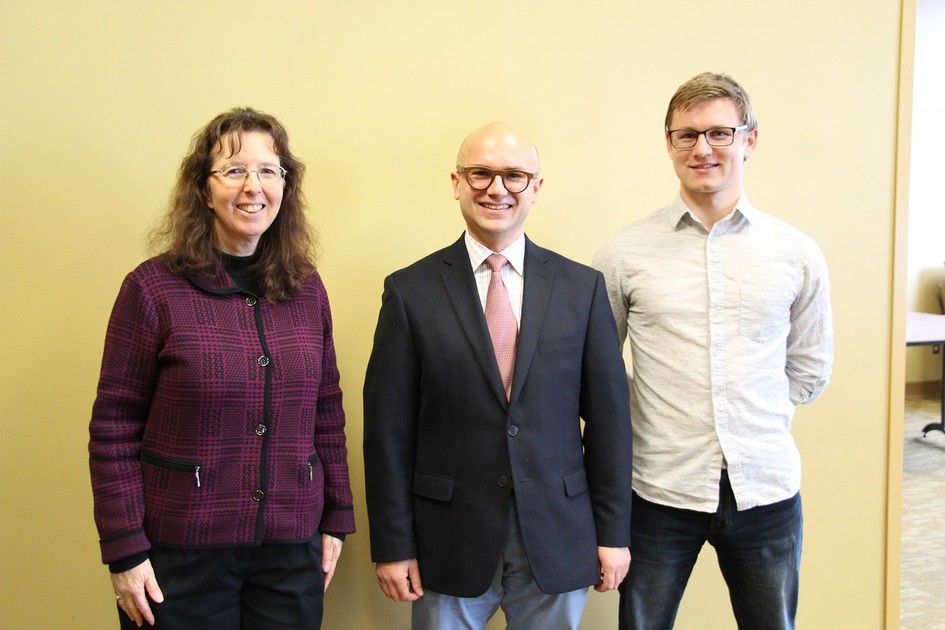 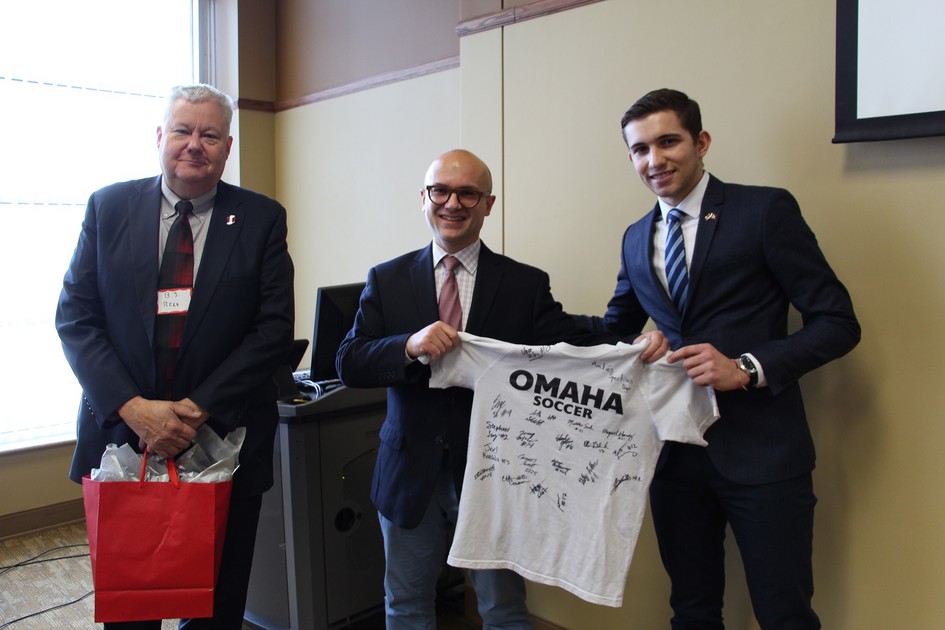 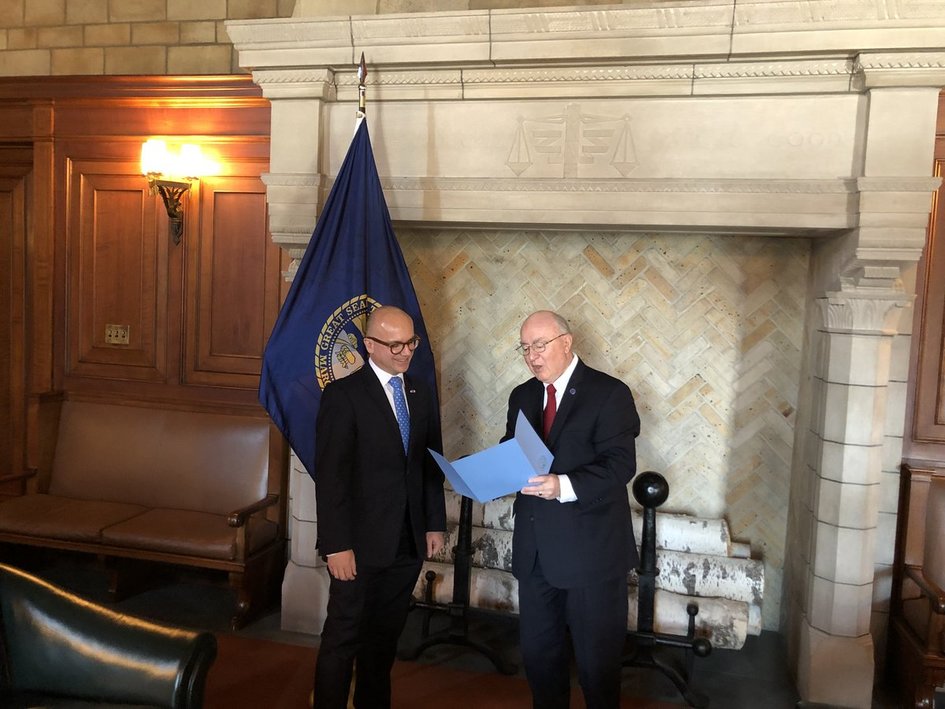 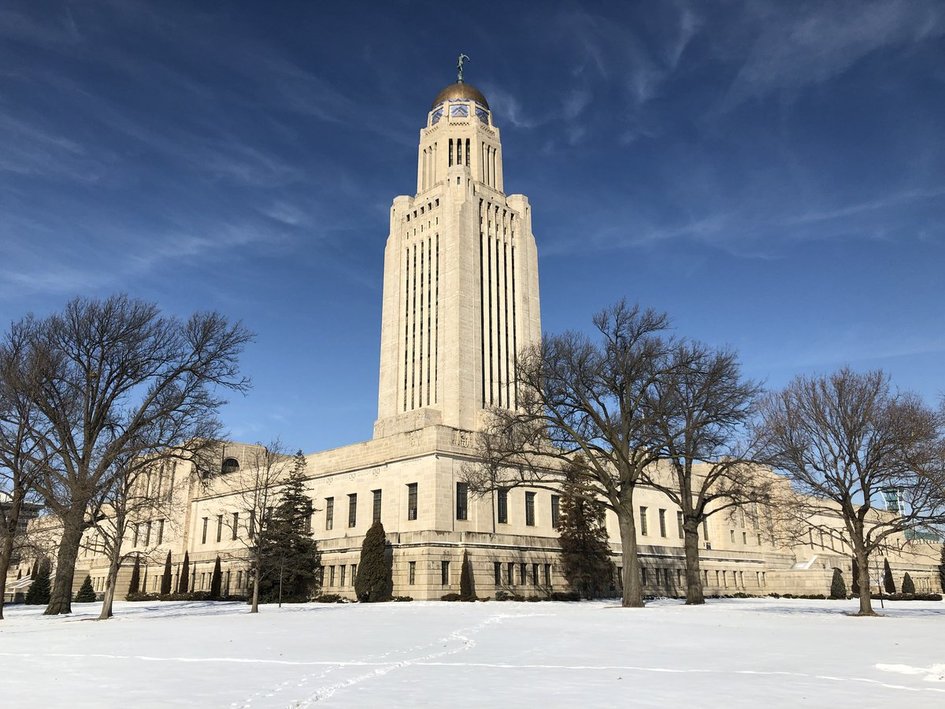 The Nebraska State Capitol, the product of a nationwide design competition won by New York Architect Bertram Grosvenor Goodhue in 1920, is described as the nation’s first truly vernacular State Capitol. The present building, the third to be erected on this site, was the nation’s first statehouse design to radically depart from the prototypical form of the nation’s Capitol. It was constructed in four phases over ten years from 1922-1932. 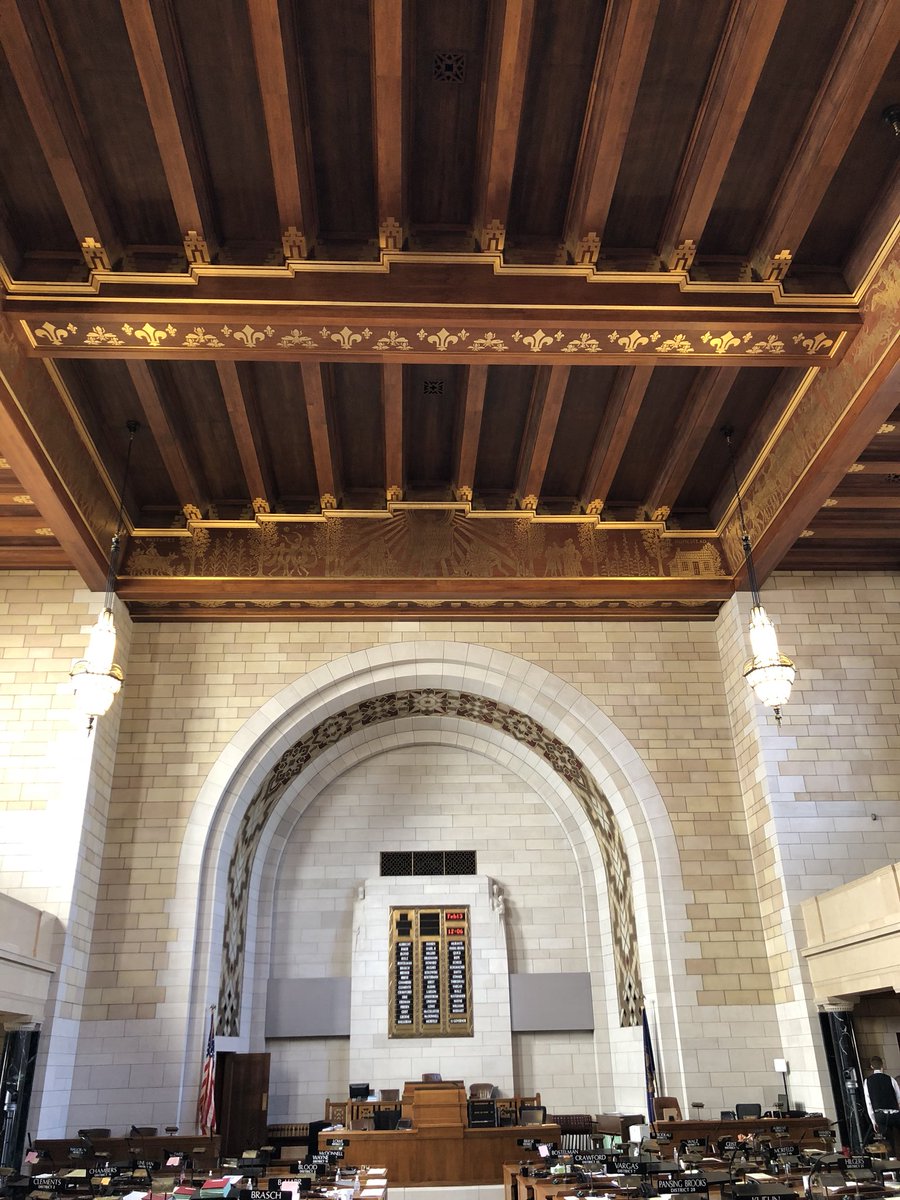 Beautiful Fleur de Lys ornementation at the Nebraska Capitol Building in Lincoln as a reminder of the French explorers and colonists who discovered and settled in the area. René-Robert Cavelier, Sieur de La Salle in 1682 who claimed the area first when he named all the territory drained by the Mississippi River and its tributaries for France, naming it the Louisiana Territory; Étienne de Veniard, Sieur de Bourgmont who traveled from the mouth of the Missouri River in Missouri to the mouth of the Platte River, which he called the Rivière Nebraskier, becoming the first person to approximate the state’s name; brothers and French-Canadian voyageurs Pierre Antoine and Paul Mallet who renamed the river the Platte River in 1739; French trapper Jean-Baptiste Truteau who established a trading post 30 miles up the Niobrara River in 1794 and French colonists who settled in the area. 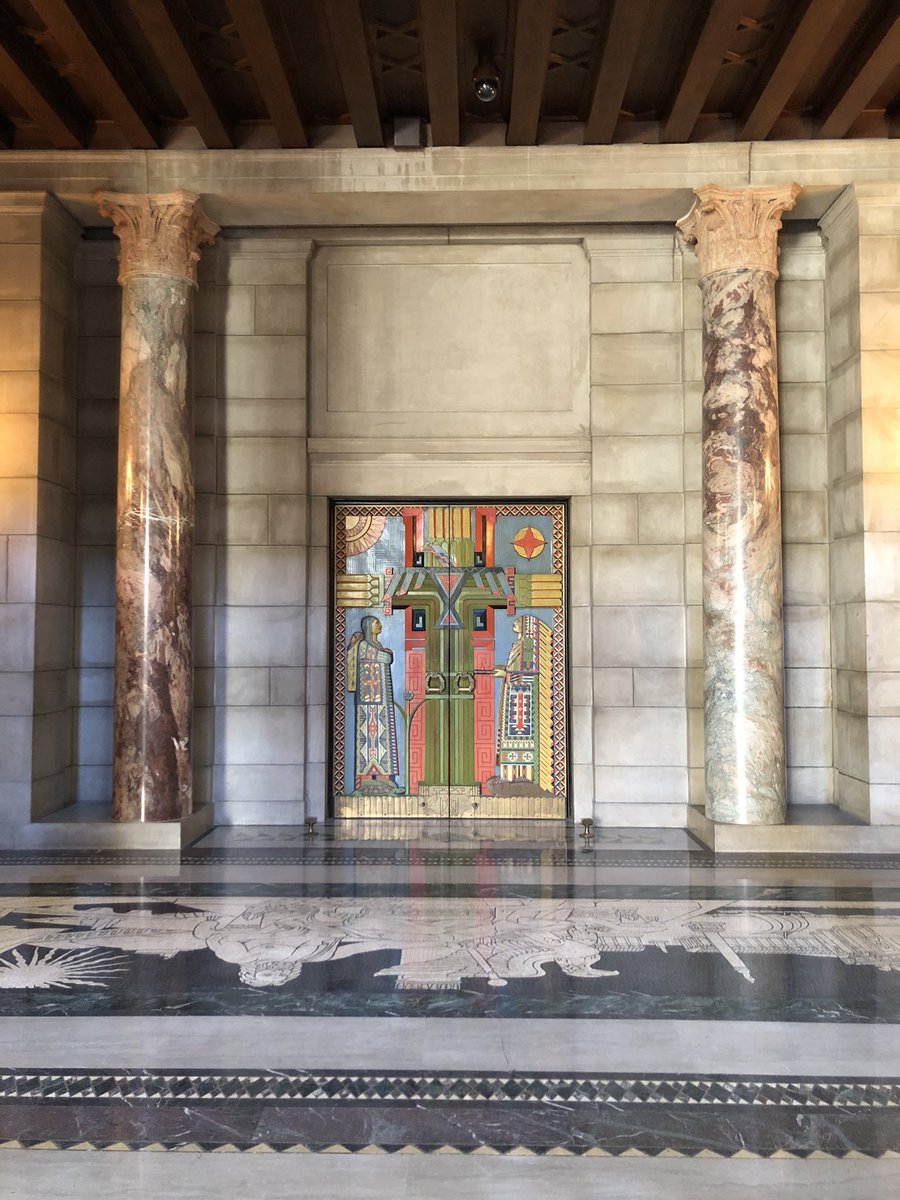 Bust of General of the Armies John Joseph Pershing (September 13, 1860 – July 15, 1948). In September 1891 he was assigned as the Professor of Military Science and Tactics at the University of Nebraska-Lincoln, a position he held until 1895. 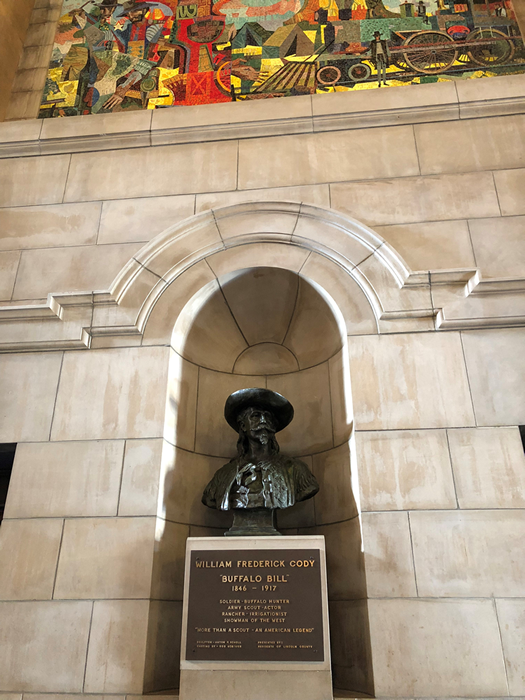 Bust of William Frederick "Buffalo Bill" Cody. In 1883, in the area of North Platte, Nebraska, Cody founded Buffalo Bill’s Wild West, a circus-like attraction that toured annually. With his show, Cody traveled throughout the United States and Europe. 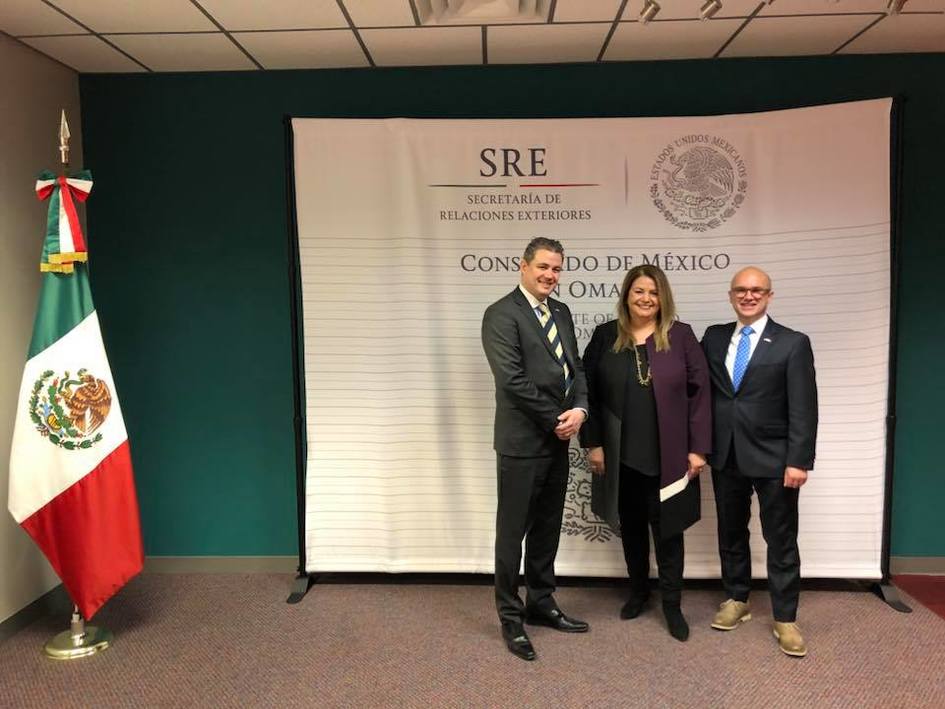 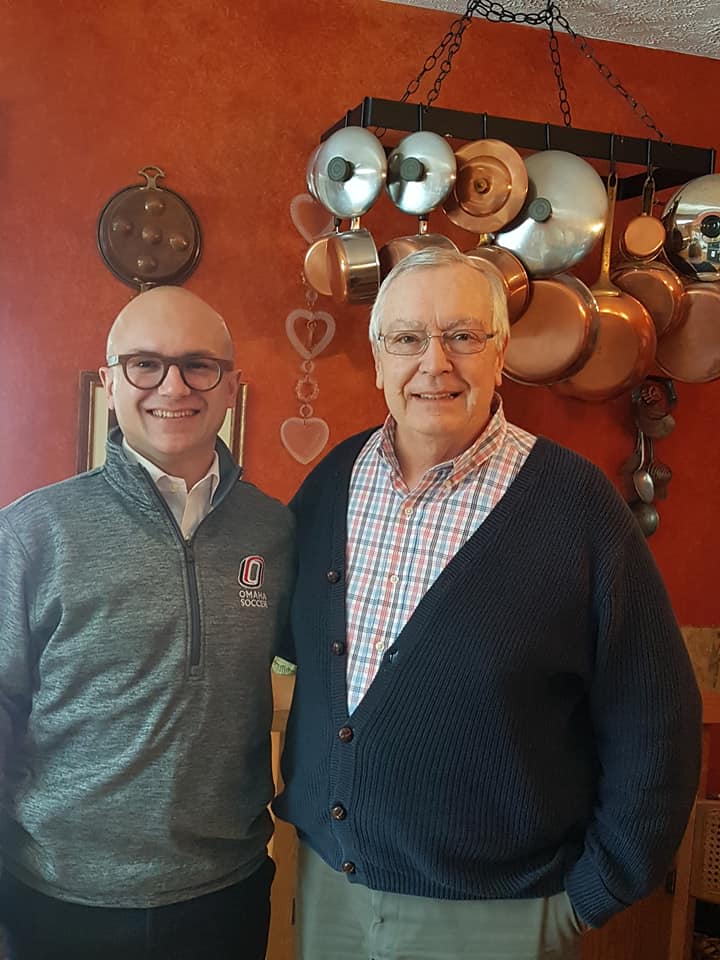 Consul General Lacroix with past Honorary Consul of France Bernard Duhaime (2008-2013) and former President of the Alliance Française in Omaha (2002-2008).