As plans were being made to commemorate renowned French chef Jean-Claude Poilevey — who died over the weekend in a multi-car accident on the Eisenhower Expressway — he was praised not only as a culinary titan, but as a unifier of the French expat community in Chicago.

“He was a quite a pillar of the French community,” said Jean-Christophe Paris, who serves as deputy to Vincent Floreani, the Consul General of France in Chicago. “We are losing someone very important for us.”

Floreani was on vacation Sunday but has spoken with Poilevey’s wife to express condolences, Paris said.

Le Bouchon, Poilevey’s restaurant in Bucktown, “is one of the places where the French community gets together,” Paris said, noting that about 2,500 French citizens live in Chicago, and an additional 2,500 in the suburbs.

Poilevey, a chef and restaurateur at the forefront of French cuisine in Chicago beginning in the ’70s, was killed in a 15-vehicle crash on the Eisenhower Expressway. He was 71 years old.

Poilevey, of Oak Park, was outside his car about 12:40 a.m. Saturday when he was struck by another vehicle in the crash, according to Illinois State Police. He was taken to Loyola University Medical Center in Maywood, where he died.

The chain-reaction crash likely was caused by black ice on the Eisenhower’s outbound lanes near Central Avenue, police said.

He entered the Chicago-area dining scene after being recruited from France to helm the kitchen of the Playboy Club in Lake Geneva, Wisconsin. He opened La Fontaine in 1973 on Clark Street.

Several other condolence notes also were posted on the door, including one that read : “I am sorry that your boss passed away and there is no boss just like your boss.” 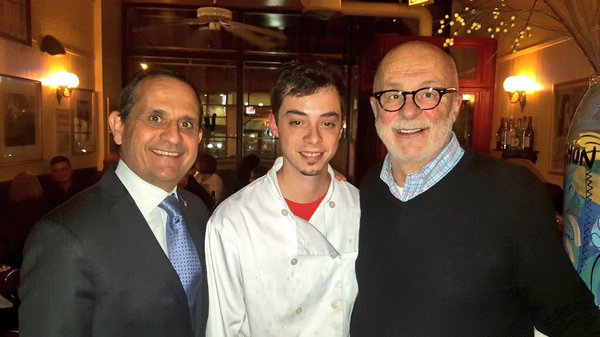 An open-house memorial service has been scheduled for Chicago chef Jean-Claude Poilevey at one of his two restaurants later this week.

La Sardine, 111 N. Carpenter St., will open its doors from noon to 8 p.m. Thursday to welcome mourners who wish to pay tribute to the renowned chef and restaurateur who was an inspiration to Chicago’s French culinary community.

Poilevey, 71, was killed early Saturday in a 15-car pileup on the Eisenhower Expressway triggered by an ice storm. The chef was returning home from Le Bouchon, his other restaurant at 1958 N. Damen Ave., where he had worked Friday night.

His death shocked and saddened scores of chefs and patrons in Chicago ; Poilevey, whose first Chicago restaurant opened in 1973, was a dean of French cooking, whose exacting standards influenced scores of culinary professionals and made him one of the city’s guardians of classic bistro food.

"He was one of those guys," said his wife, Susanne Poilevey, "who kept to a strict routine. He would get up, open La Sardine at 9:30, then open Le Bouchon after an hour and a half. He’d go home, watch some of his French TV, then return to Le Bouchon. He did the same thing every day."

Susanne Poilevey, who learned of her husband’s death more than seven hours after the crash, closed Le Bouchon and La Sardine on Saturday night. Neither restaurant is open Sundays.

Susanne Poilevey typically oversees La Sardine. Oliver Poilevey, one of the couple’s three sons, has been Le Bouchon’s chef for years. Nicolas Poilevey works as a wine importer in Oak Park. Henri Poilevey is a college senior in Olympia, Wash.

Jean-Claude Poilevey came to the United States in 1968, having been hired by the late Arnie Morton to join the culinary team at the Playboy Club in Lake Geneva, Wis., which also included the late Jean Banchet, Chicago’s first celebrity chef.

Poilevey’s first restaurant was La Fontaine, at 2242 N. Clark St., which he opened in 1973. Later, he bought out his partners and changed the name to Jean Claude, which became one of the city’s most popular French restaurants.

Rising real-estate prices inspired Poilevey to sell Jean Claude in 1993, but within months, he had opened the small but charming Le Bouchon in Bucktown. He opened La Sardine in the West Loop, across the street from Harpo Studios, in 1998.