On November 11th, Mr. Cholé presented the French Legion of Honor to WWII Veteran Russell E. Lomax, 93, of Evansville, Indiana. Evansville Mayor Lloyd Winnecke and U.S Representative Larry Bucshon from Indiana’s 8th district were both in attendance. The ceremony followed the annual service at Oak Hill Cemetery which serves as a regional site for the celebration of Veterans Day.

Private First Class Lomax entered active duty in January 1943 at age 19. He served with the 47th Infantry Regiment of the 9th Division where he was a light mortar crewman. In 1943, he was deployed in North Africa and prepared for the assault on Sicily on August 1st.

Once the island was liberated, he went to England to train for the Allied invasion of France. He landed in Normandy at Utah Beach on D-Day plus four. For days, he fought to push back enemy lines until the Cotentin peninsula was cut-off and Cherbourg was captured. After the fall of the city, combats continued in the hedgerows towards Saint-Lô.

In July, Mr. Lomax was captured along with a dozen of other comrades and was marched back behind enemy lines. As he was marching, Mr. Lomax and Sergeant Carlsrud, another serviceman, broke the line and ran off. Both were wounded by enemy fire but they made it back to their company. They never heard of the other soldiers again. Later that month, he was wounded again and had to be evacuated to England. Today, Mr. Lomax still have a piece of shrapnel close to his spine that reminds him of these dreadful days. Later, he was sent back to the front in north eastern France, then on the German-Belgium border and finally in Germany. 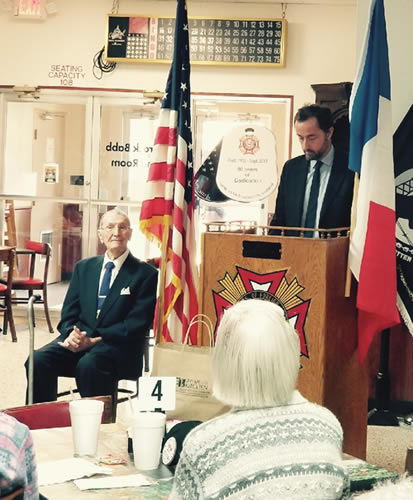