Federation of Alliances Françaises USA Convention and Annual Meeting - Minneapolis - October 20–22, 2016Remarks by Consul General of France Vincent Floreani on the occasion of the presentation of the Charbonnier Prize to Mr. Hubert JOLY.
Minneapolis, October 21st, 2016 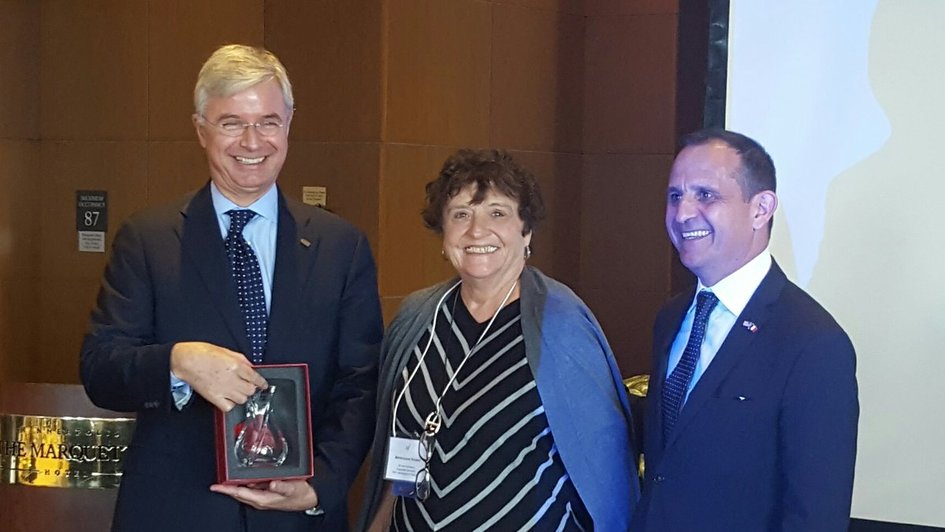 
It is a pleasure and an honor to be with you today at the National Convention of the Alliances françaises to recognize Mr. Hubert Joly.

First of all, on behalf of the Ambassador of France to the United States, His Excellency Mr. Gérard Araud, I would like to convey his strong appreciation of the outstanding work of the 110 Alliances Françaises throughout the nation.

Because of his very busy schedule just a few weeks before the election, he could not come to Minneapolis today but he has asked me to tell you that he’s very committed and strongly supports your actions. The Federation and each of the Alliances play a major role in promoting French language and culture in the US.

I travel often through the vast Midwest and it’s always a pleasure to visit the Alliances, here in the Twin Cities of Minneapolis-Saint-Paul, in Detroit, Kansas City, Milwaukee, Cincinnati, North Shore, Chicago of course and so on. Each time, I’m impressed by the wide array of programs you offer and by your dedication. Merci beaucoup, du fond du coeur, à chacune et à chacun d’entre vous pour votre engagement.

Your actions contribute to further deepen the ties between France and the US. This is a key priority for the Ambassador and for all the general consulates in the US. Our bilateral relations have never been better. France and the US, as allies, partners and friends, face together global challenges, including terrorism and the effort to promote peace and security. Our economic relations are growing stronger. French companies have created more than 1/2 million jobs in the US and American businesses provide work for close to 1/2 million employees in France. Many French people, such as Mr. Hubert Joly, contribute greatly to the US economy, research, and innovation.

To support your mission, you can rely on the US Délégation générale, led by Ms. Nelly Sadoun and with the support Carlos Tabernoro. They are here in Minneapolis for this Convention and are eager to further reinforce this cooperation with you, in particular to offer you access to cultural programs for children or to foster student interaction with you and with Campus France.

You can also count on the Cultural Service of the French Embassy, led by the Cultural Counselor Ms. Bénédicte De Montlaur, who has asked me to convey her deep appreciation for your work.

In each of the 10 French General Consulates in the US, you will find various partners, all happy to cooperate with you. The Midwest is a great example of this cooperation. A case in point is the French inspired Food and Wine Festival, that started yesterday. It was developed in partnership with the Alliance Française in Chicago and includes an event in this Alliance Française of Minneapolis.

Let me now turn to our guest of Honor, Monsieur Hubert Joly.

Mr. Joly is the Chairman and Chief Executive Officer of Best Buy. Everybody knows Best Buy. The company is the leading retailer of technology products, services and solutions, with 1,600 stores in North America, a very strong presence online, and over $40 billion in annual revenue.

Under the chairmanship of Mr. Joly, Best Buy, has enjoyed remarkable growth. Before joining Best Buy, Mr. Joly was CEO of Carlson and previously led Carlson Wagonlit Travel, Vivendi Universal Games and Electronic Data Systems. Mr. Joly also plays an important role in the local community as an active member of several executive boards, including the Retail Industry Leaders association, the Minnesota Business Partnership, and the prestigious Minneapolis Institute of Arts. And I also would like to commend you on your personal support for last year’s major exhibition Eugène Delacroix and Modernity.

Monsieur Joly, you are also a strong champion of the Alliance française de Minneapolis-Saint-Paul. For years now, your extraordinary generosity and enthusiasm allow this very dynamic Alliance to broaden its programs and services and hopefully to expand and remodel its building to make it accessible and welcoming to all. Monsieur Hubert Joly, you make us proud.

It is with a great honor for me, on behalf of the Federation of Alliance Française and with the congratulations of Ambassador Gérard Araud, to award you the prestigious Prix Charbonnier.