Remarks by Ambassador Gerard Araud, Ambassador of France to the United States on the occasion of the presentation ceremony of the distinction of Knight of the Legion of Honor to Gloria Groom, chair of the Art Institute of Chicago’s European Painting and Sculpture department. (April 29, 2016). 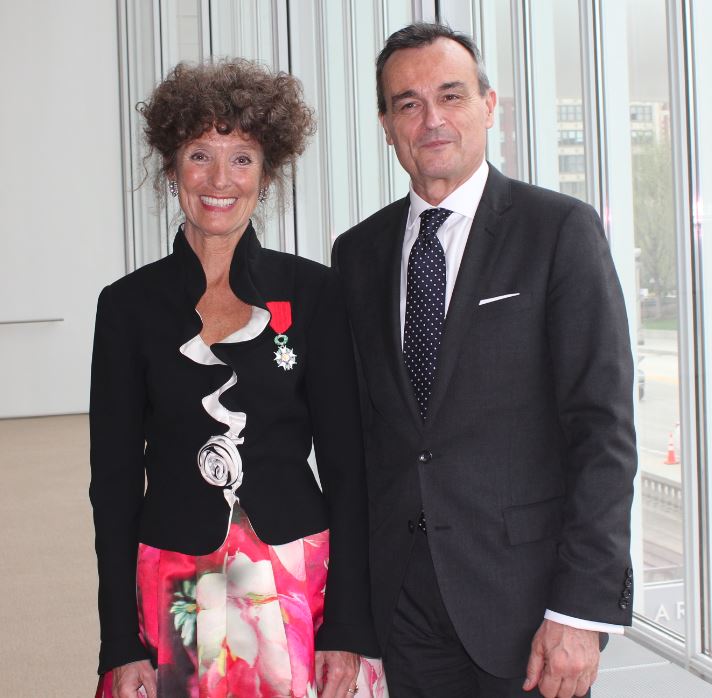 Only the speech as made may be considered authentic.

The Art Institute of Chicago is one of the most significant museums in the world. It is home to an incredible collection of French art- “A Sunday on La Grande Jatte” is without doubt the most famous French painting outside of France. Gloria Groom, who we are celebrating today, is the guardian of this French and American treasure.

Gloria has dedicated her passion, intelligence, and energy to French painters of the second half of the 19th century. In the early 80’s, Gloria studied Art History in the Ecole du Louvre and History of Museums of the Developing World in UNESCO.

She is no stranger to the different facets of French and francophone society. She has learned to find joy in sharing space and part time jobs. She teaches English to businessmen who often invite her over for Sunday Lunch with their families. She knows how to join in on the fun with students; having grown up in Martinique, Niger, Senegal and Vietnam. As soon as she could make people laugh in French, Gloria knew she was at home in the cosmopolitan city of Paris. She sums up this period of her life in one thought: “France is the stuff of dreams.”

It was also at this time that Gloria developed her methodology that made her a reputable expert of the 19th century. She devoured novels by Emile Zola. She studied, pencil in hand, the life of Rougon-Macquart, tracing the journey of a Second Empire family. She spent her afternoons at the library of the Institut de France, decoding painter Edouard Vuillard’s notebooks. She drew up a list of names, consulting the directory and the Bottin Mondain. The sons and heirs of painters and novelists opened doors for her. The notaries public let her consult inventories of cultural property to learn about the important works of art and where they could be found in the world.

Gloria grew up in a family typical of the 1950’s American Dream. Her parents lived through the Great Depression. Happiness to them, was having a big family- five children whose first names all start with the same letter: Gary, Gordon, Gail, Gloria and Greg. The United States had become an example for the world to follow, much like France was the century before. When asked about this comparison, Gloria agrees: “[Where you’re born] doesn’t matter much. In the Paris of the 19th century or the 60’s in America, we had to bring ourselves up and strive for success, so as not to collapse.” Her internship director at the Museum of National Arts and Popular Traditions, a staunch royalist, found it regrettable that young Gloria didn’t love the Ancient Regime. Nothing could be done however, as Gloria had chosen her side. For the last 20 years, she has been loyal to the 19th century, the industrial revolution, and the avant-garde aesthetic.

What is most striking in Gloria’s career is the symbiosis that exists between her personal and professional growth – Research Assistant in 1984, Assistant Curator in 1990, Associate Curator in 1995, Curator in 1999, Senior Curator since 2013, and the astounding progress of the Art Institute – under great President/Directors including James Wood, James Cuno, Douglas Druick and today, James Rondeau. The place a museum holds in today’s society has changed phenomenally from the 1970’s. These temples of learning and leisure have started and continue to attract a larger and more varied audience. The impressionist painters were among the first to enjoy rock star status. The curators have had to produce blockbuster exhibits. Martha Tedeschi, Deputy Director of the Art Institute who has known Gloria for decades said: “The Art Institute is a collection of collections and French painters occupy the heart of it. They are world famous and Gloria has been their champion for many decades.” Last but certainly not the least, Gloria’s mission has always been to make no compromises in terms of scientific excellence.

Over the course of 15 exhibitions, Gloria has invited the public to see the great masters of French modern painting in a new perspective; painters such as Caillebotte, Degas, Manet, Monet, Renoir, Seurat, Sisley. Not to mention Pissarro, Redon, and Toulouse-Lautrec. At this very moment, Van Gogh; and a few months from now: Gauguin. However, two ambitious and rare projects have stood out: in 2006 and 2007, the Met, the Musée D’Orsay, and the Art Institute presented an exhibit on the art dealer Ambroise Vollard and his artists; and in 2012-2013 those three museums presented the exhibit of Impressionism and Fashion- a total sensory experience. Audiences were invited to discover items of clothing typical to the era. They walked on grass carpets. They heard birds singing. Martha Tedeschi describes: “Coming out of the exhibit, you really had the sense that you were stepping out of the 19th century and back to present time.” This successful exhibit, 500,000 attendees in total, matched only by the Musée D’Orsay, earned Gloria high esteem and respect from her peers and praise from the audience.

Gloria has welcomed new challenges since 2013. As the head of the Department of Medieval to Modern European Painting and Sculpture, she is in charge of seven centuries of European art: Middle Age, Renaissance, Baroque, 19th century, impressionism and post impressionism. Her expertise puts her at the helm of an exceptional team of curators. She is close to important members of the Art Institute’s Old Masters Society. She is always focused on the future, always looking for fresh and interesting programming for the museum. French painters have by the way been the first to benefit from Gloria’s vision. Each one of her successes, she shares with her historian husband Joe Berton and their sons Alexander and Philip.

Gloria Groom has a special something about her- a certain “je ne sais quoi.” Douglas Druick calls it the “Glorianess of Gloria.”Guy Cogeval, President of the Musee d’Orsay sees in her a heroine from the filmmaker Eric Rohmer. According to Martha Tedeschi: “Gloria channels the 19th century.”

Without her, France would be less known and less loved. Gloria is a friend that we consult every time a new project between Chicago and Paris is presented. We are always guided by her advice, intuitions and readiness to help. Many recent projects, including ones with the Centre Pompidou, the Palais de Tokyo and the Festival d’Automne, whether they come to fruition or not- have benefited from her contributions.

Today, everlasting France, France of yesterday and of tomorrow, expresses her admiration and her appreciation. For the third time formally, Gloria was named Knight of the Order of Arts and Letters in 2005, then Officer in 2012. On behalf of the President of the French Republic, I am delighted to induct you today dear Gloria, with the highly prestigious rank of Knight of the National Order of the Legion of Honor. Gloria Groom, au nom du Président de la République et en vertu des pouvoirs qui nous sont conférés, nous vous faisons Chevalier de la Légion d’Honneur.