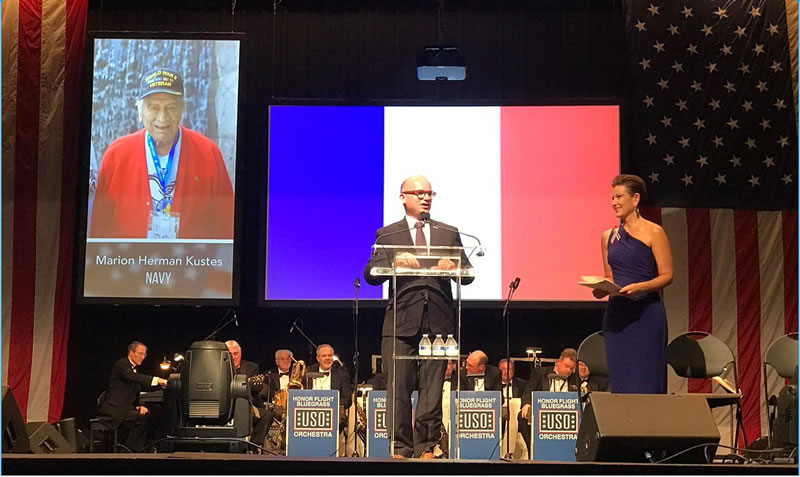 Remarks by Consul General Lacroix on the occasion of "Operation Bravo Zulu," the largest reunion of WWII Veterans in the State of Kentucky’s history. The event, which was held on June 6, 2019 at the Louisville Memorial Auditorium, gathered over 120 Veterans.

It is a great honor for me to be with you tonight, to represent the French Republic and the French people to say “Thank you”.

Thank you for your sacrifice

Thank you for your dedication

Thank you for serving with honor your country

You served your country and you saved my country, France.

Without the sacrifice of America’s Greatest Generation, without the support of the men and women of this great country, France would no longer be what it is today: a free, independent and democratic country, and a true ally of America and the western world

France and America have always been together. We are your oldest ally. It turns out this city is called Louisville! This is not an accident. This is not a coincidence.

We take pride in helping America become what it is today. But I am here to express our gratitude.

Gratitude for the debt that we will never be able to repay in full to America.

In 1944, 75 years ago, you stormed the Normandy beaches with our allies.

You call it the Normandy invasion. It is true, it is an invasion. But, seen with French eyes, this is not an invasion. You were welcome invaders. You came to liberate France and Europe. To liberate the world from tyranny.

I want to express special thanks to those of you who served in France. But that does not mean that we do not recognize the sacrifice of all American soldiers who served in Europe, in the Pacific and elsewhere. This was one war and we won it.

I have held this position for two years. I have come to Kentucky on several occasions. On three special occasions, I came here to recognize three true American heroes. I presented them with the medal of the French Legion of Honor. This is my country’s highest distinction. It was founded by Napoleon and now it is President Macron who is the only person who has the authority to bestow such a medal.

I came to Lexington to honor Marvin Mills. He passed away. But I was blessed to get to see him and recognize him and his family. I came to Olive Hill, Kentucky to recognize Mr. Jack Baker, another true American hero. A few months ago, end of last year, I came to Frankfurt to present Mr. William Pollard with the medal of the Legion of Honor. Mr. William Pollard passed away the week after. I want to have special thoughts tonight for Mr. Mills, Mr. Pollard and all those who are no longer with us. Believe me, the ones who died in my country, France, we take good care of them and the war cemeteries, their land of adoption.

The French people will never, ever forget. I speak on behalf of all generations in France, including the generations to come. I am the grandson of two world war veterans. I have two kids, 8 and 4 years old. They know already, as I was told by my grandmother when I was 5 years old the sacrifice of America for us. She taught how to count to ten in English. She said “maybe one day, that would help you”. And here I am.

The next generation, and the generation after, will always remember.

Thank you very much. It is such a great honor to get to be standing with you and your families. 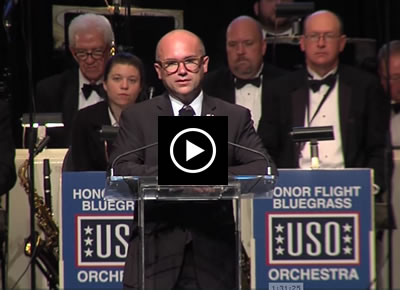 Edited from a video by David Cambron (full version).