The American Society of Clinical Oncology welcomed 40,000 participants at the Mc Cormick Place

The American Society of Clinical Oncology (ASCO) is dedicated to conquering cancer through research, education, and promotion of the highest quality patient care. The association is based in Alexandria and has over 45,000 members in 150 countries.

Each year, the ASCO hosts the world’s largest cancer research congress in America with 40,000 US and international participants. The ASCO Conference was held May 31 to June 4, 2019 at the McCormick Place Convention Center in Chicago. For five days, a multidisciplinary program dedicated to present the last breakthroughs in cancer research. The theme of this year’s conference was "Caring for Every Patient, Learning from Every Patient ".

Here are some research released during the ASCO meeting:

For colorectal cancer, laparoscopic surgery is as effective as open surgery in treating liver metastases

More information on the research released during 2019 ASCO

France is a leading country in cancer research, it is ranked 6th in high impact publications and in intellectual property. French teams in oncology have showed their strong attractiveness to the international health industries, particularly in clinical research. Cooperation in fundamental research has also been consolidated, particularly at the European level. France plays a leading role in structuring the European area of research in oncology.

Since 2003, France has been structured in a way that research institutions are the most effective to fight cancer. Under the leadership of the successive Presidents, 3 national cancer plans have been launched in order to ensure the continuum of actions, from research to life after cancer, including early diagnosis, quality of life care, prevention and information of patients and the public.

In 2018, the French delegation was the first European delegation at ASCO with Germany (1 185 representatives) and the fourth biggest one behind the US (18 000), Japan (1 445) and China (1 231). From left to right : Pr Philippe Ruszniewski, Mr Guillaume Lacroix, Mr François Crémieux 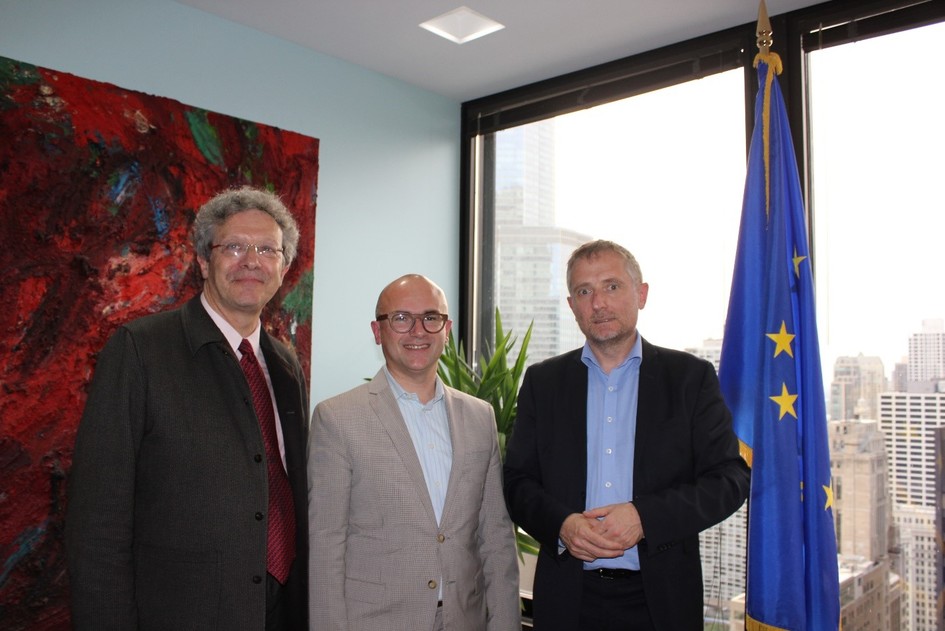 In parallel of the congress, fifty French cancer researchers from the Assistance Publique des Hôpitaux de Paris (AP HP) were received at the French Consulate in Chicago. Mr Guillaume Lacroix, Consul General, Mr François Crémieux, one of the Deputy Directors of the AP HP, Pr Philippe Ruszniewski, Dean of the University of Denis Diderot were present. The AP HP treats one third of cancer patients in the Île-de-France region. The AP HP is also the leading employer in Ile-de-France with more than 100,000 professionals.

Reception for French oncologists at the French Consulate in Chicago on Friday, May 31st, 2019