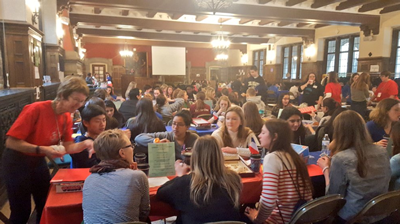 It is a pleasure to be with you all today.

Firstly, I would like to thank the American Association of Teachers of French, the Delegation of Québec, and the Cultural Service of the Consulate of France for supporting this event.

I would also like to thank Dominican University, especially Beth Landers and Dave Carlson, for hosting.

A special thanks to Donna Czarnecki and Sylvie Goutas, who are coordinating today’s event and to the four professors who are conducting the workshop: Marnie Goodfriend, Andi Isabelli, Thomas Sapp, and Eileen Walvoord.

Students, I have one message for you: learning a foreign language, and learning French specifically, is good for you in countless ways.

Students who study foreign languages tend to score higher on standardized tests than their monolingual peers. France can also be your study abroad destination. It is the third most-visited country by foreign students. Paris is the world’s preferred city for study abroad. French is also the most widely-learned language after English. Over 300,000 people learn French in the Midwest.

Learning French also furthers your career prospects. Students who speak several languages multiply their chances in the job market both here in the United States and abroad. France is one of the top global economic powers, so the ability to speak French is an asset for finding work in numerous French and francophone multinational corporations in a variety of sectors including: luxury goods, aeronautics, the automotive industry, hospitality, and many more.

Not only will learning French be beneficial for your studies and for your future career prospects, it is also a rich and rewarding experience in itself. Over 270 million people speak French across the five continents. By 2050, this figure is estimated to reach 750 million. Imagine the possibilities this opens you up for; meeting new people all over the world and travelling to places you would have never dared to visit. Also, French culture is one of the most vibrant cultures in the world. French music, films, food, literature, theatre, fashion… the list of phenomenal French contributions to the world is endless.

To be sure, learning a foreign language is a real challenge, but it truly is a rewarding experience that will teach you valuable lessons about the world, and about yourself.