Home > Remarks by Consul General of France Vincent Floreani for World War I (...)

Remarks by Consul General of France Vincent Floreani for World War I Centennial Commemoration on April 7, 2017 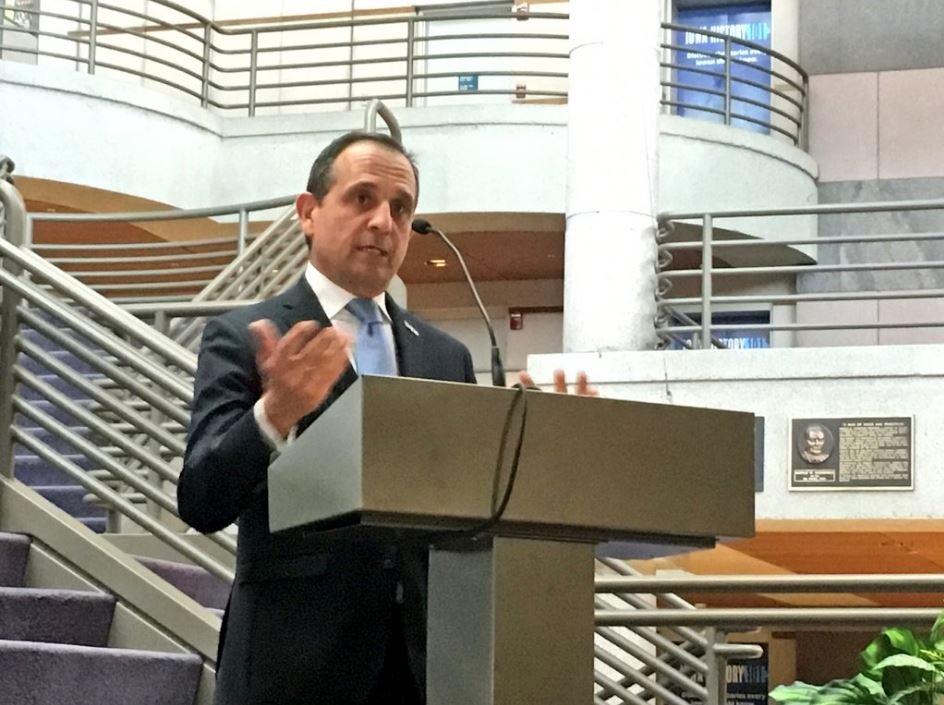 I’m delighted to be with you, Herbert, and Mark, this evening in this beautiful State Historical Museum to remember WWI.

Yesterday, I was with my colleague and friend, Herbert Quelle, Consul general of Germany, in Kansas City at the WWI National Museum to commemorate the centennial of the United States entry into the Great War on April, 6th 1917.

The memory of the First World War is immortalized in France because it deeply affected and transformed my country. It is the harshest ordeal that the French people, as a whole, has ever experienced. The French territory was the main battleground during the conflict. 8 million French people – or more than a fifth of the total population – were drafted. That would be the equivalent of 64 million men in today’s America. One and a half million were killed and hundreds of thousands were badly injured.

This conflict took place a century ago. What lessons can we learn from this critical moment in History?

In my opinion, at least 3 points: these commemorations reinforce the French-American friendship with a reminder of our common values. They are also an extraordinary example for the world of the Franco-German reconciliation. Finally they are a call to strengthen the multilateral institutions. If I may, I would like to elaborate on these 3 points.

First, the common values that shape the French-American friendship. Yesterday, the Ambassador of France read a beautiful text from April 5th, 1917 by the then French President of the Council. This text came after President Wilson’ speech.

Allow me to read a few excerpts "What particularly touches us is that the United States has always kept alive that friendship towards us which was sealed with our blood (...) The people who in the eighteenth century made a declaration of rights under the inspiration of the writings of our philosophers, the people who placed Washington and Lincoln among the foremost of its heroes. The people who in the last century liberated the slaves, is well worthy to give the world such an exalted example. (...) The blood poured out so generously by the sons of France has been shed in order to spread the ideals of liberty and justice which are necessary for the establishment of concord among nations."

Now, the Franco-German reconciliation. After a century of war and millions of casualties, General De Gaulle and German Chancellor Konrad Adenauer, two great statesmen, dared to reconcile. This led to the 1963 Elysée Treaty between France and Germany. Their successors, President François Mitterrand and Chancellor Helmud Kohl, Presidents Nicolas Sarkozy, François Hollande and Chancellor Angela Merkel have reaffirmed this reconciliation through deeply moving and courageous symbolic gestures.

This reconciliation also lives within the French and German people. Thousands of sister cities partnerships, cooperations and Franco-German organizations make up an incredible number of ties between the two countries. Education is also a priority. In France, the German language is extensively taught. It also contributes to bringing the people together, just like the mandatory reading by middle school students of the book "All Quiet on the Western Front". This book by German author Erich Maria Remarque offers a German perspective on the conflict.

This unprecedented reconciliation between France and Germany is an example for all the people in conflict, and for the world.

Finally, the multilateral organizations. This Franco-German reconciliation laid the groundwork for the European Union. It has brought to our continent 70 years of peace and prosperity. Europe built itself not to erase sovereignties but to construct a community of values and cooperations. Europe successfully reunified the continent in democracy and respect of human rights. It is an exceptional adventure in the History of humanity. We are deeply committed to it. Of course, it can and should further progress. To reach that goal, much will depend on France and Germany’s combined efforts.

This cooperation is also decisive on the world stage. After WWI, the leaders founded the League of Nations and believed in a sustainable peace. But it failed. The United Nations created after WWII successfully corrected the weaknesses of the League of Nations. Even if it should improve, it is also a factor for cooperation, progress, peace and promotion of values at the global level.

It is also an institution we hold dear.