Congratulations to Paul for sharing his family’s adventures in France throughout the years!


When I was 6 years old (1966), I lived in Ottawa, Canada and French was a required school subject starting in the first grade. I really enjoyed it and took French yearly through high school. When in college at the University of Michigan Business School, I was a member of the French business organization, AIESEC. It is there that I met a couple of contemporaries who were graduates of HEC-Paris, or Ecole des Hautes Etudes Commerciales de Paris. We became good friends, and within a year of graduating from college, (and saving a few dollars), I took my first trip to Paris to visit them and to see everything that I had been learning about throughout my childhood. What a thrill……….

Since then, I have travelled to France for pleasure quite regularly. My wife had been to France when in high school, and shares my love of the country. Together, we have two sons. They started taking French in kindergarten. We have had friends suggest that taking their children to Europe is something that should wait until they are “older”. To that I say, nonsense! Think of the thrill of being in a taxi arriving in Paris with your young family for the first time……having their eyes as wide as can be…… and they’re calling out the sights as we drive by…

“Look Mommy….the Eiffel Tower” “Daddy, look, it’s the Obelisque!” “Wow, it’s the Arc de Triomphe……..look at all the cars going around it!”

Walking the streets, stopping for a Pain au Chocolat snack, seeing many of the world’s art treasures in person, touring the countryside with sunflower fields that go on forever, running through the bunkers of Normandy, staying in converted castles and running around the ruins as the sun sets………seeing France through the excited eyes of your children………it doesn’t get much better than that.

My sons are now young men, and the love affair continues. Last summer we were in Paris together repeating some of the things that we have come to love to do such as walking around St. Germain des Prés, and spending a day combing through Le Marché des Puces. This year my sons ventured out into the Paris night clubs. They both want to know when we are coming back. Next year, I tell them, next year. 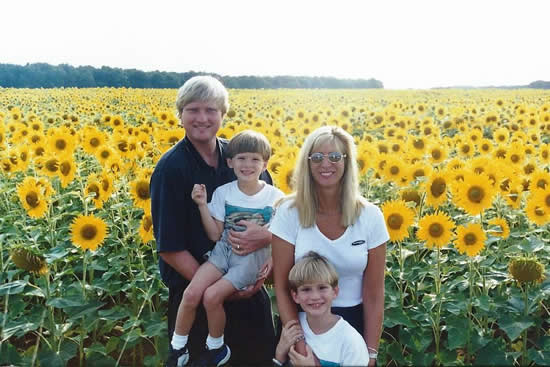 Paul receives his prize, a bottle of Taittinger Champagne, from Pascal Goachet, the Honorary Consul of France in Michigan.

• D-Day and the Battle of Normandy - Tourism