February 22-28, Camille Serme World No.3 and Grégory Gaultier World No.1 are back to Chicago to compete in the 2018 Windy City Open. Don’t miss this exciting event which is one of the most prestigious of the series.
Location: University Club of Chicago - Cathedral Hall 76 East Monroe Street 312.696.2265


For schedule of events, info and tickets go to: windycityopen.com/ 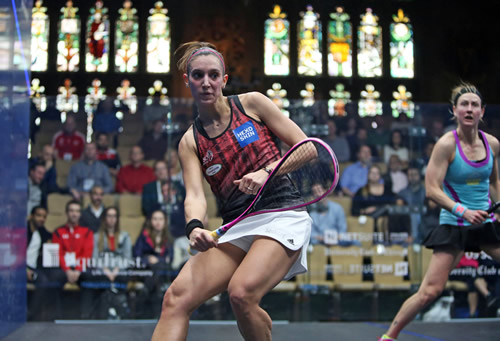 The 2018 Windy City Open presented by the Walter Family and EquiTrust Life Insurance Company is in line to host repeats of both the 2017 men’s and women’s PSA World Championship finals after the draw for the PSA World Series tournament was released today (January 30).

This year’s instalment of the Windy City Open - which takes place inside the University Club of Chicago’s stunning Cathedral Hall between February 22-28 - will become the most lucrative PSA World Series tournament of all time, with $500,000 worth of prize money split evenly between the men’s and women’s draws.

A repeat of the men’s World Championship final could be played as early as the quarter-finals, with World Champion Mohamed ElShorbagy set to face younger brother Marwan in the last eight - the same stage where Marwan claimed a hugely emotional win over his sibling at last year’s tournament.

Marwan had never before beaten then-World No.1 Mohamed but battled to a 3-1 win, resulting in tears from both brothers after the match, while he eventually reached a maiden World Series final before going down to current World No.1 Gregory Gaultier in the title decider.

Gaultier will meet a qualifier in round one, while a mouthwatering clash with England’s Nick Matthew - who became the oldest ever World Series title winner when he won this tournament in 2015 - could happen in the quarter-finals as Matthew competes at his last ever Windy City Open, with the two-time winner set to retire at the end of the season.

In the women’s event, defending champion Raneem El Welily is seeded to meet World No.1 Nour El Sherbini in the final, with the duo having contested three successive PSA World Tour finals - a run that included last month’s World Championship final in which El Welily prevailed.

El Welily is the most successful woman ever at the Windy City Open and has won the last three editions in a row, including back-to-back final victories over El Sherbini in the 2016 and 2017 finals.

The 29-year-old Egyptian is seeded on the same side of the draw as 2015 runner-up Nicol David and 2014 winner Laura Massaro, while El Sherbini also has a difficult path to the final, with the likes of U.S. Open champion Nour El Tayeb and World No.3 Camille Serme lying in wait.

The winners of the tournament will pocket $38,000 - a record amount for a World Series tournament - while points for the men’s and women’s PSA World Series Standings, which are currently headed up by Mohamed ElShorbagy and Nour El Sherbini, respectively, are also on offer as the battle for a top eight place - which guarantees participation in June’s PSA World Series Finals - intensifies.

Action from the glass court matches will be streamed live on SQUASHTV (Rest of World) and Eurosport Player (Europe only), with matches from the semi-finals and finals also shown live on mainstream broadcasters around the world, such as BT Sport, beIN Sports, Fox Sports Australia and Astro.

Tickets start from $25 and can be purchased here.