Home > WWII Ceremonies in the Midwest

WWII Ceremonies in the Midwest

On the occasion of Veterans Day, several ceremonies were held around the Midwest to honor WWII Veterans.

On November 11, Consul General of France Vincent Floreani made a special trip to Ohio to honor veterans of WWII in Dover and Coschocton. He presented 4 veterans with the French Legion of Honor.

In Dover, Consul General Floreani bestowed upon Mr. John Wayne Meechan Sr., the French Legion of Honor at the Country Club Retirement Center in the presence of family members and friends, as well as a group of 14 veterans.

Mr. Meechan Sr. entered military service in July 1942 at age 22 and served in the attack company of the 424th Anti-Tank Company of the 106th Infantry Division, also known as the Golden Lion Division.

From October 1944 until November 1945, he fought in the Northern France, Rhineland, and the Ardennes campaigns. He endured some of the most horrific fighting of the war and experienced the most severe conditions imaginable.

For his bravery, Mr. Meechan has received several military awards from the American Government, including the Good Conduct Medal, The American Theater Service Medal, The WWII Victory Medal, and the European, African, Middle Eastern Theater Medal with 5 Bronze Star.

The event took place in the garden of the beautifully renovated Courthouse. More than 400 people were in attendance, including local authorities, and many area veterans.

"70 years ago, Mr. Couts, Mr. Gibson, Mr. Leach you were ready to sacrifice your young life for our freedom. For a country that was not even yours. Now it is. The images of those days are part of our collective memory. Gratitude and remembrance are forever in our souls. Every French person has a special place in his heart for you"
- Consul General of France Vincent Floreani. 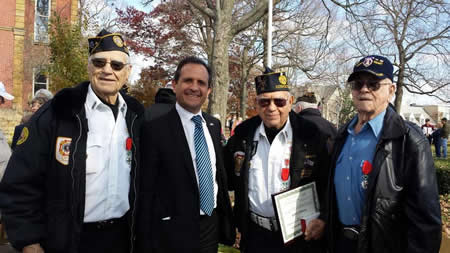 Mr. William J. Couts entered military service in August 1943 at age 18 and served as a rifleman in the 358th Infantry Regiment of the 90th Division. From April 1944 until January 45, he fought in the Normandy, Northern France, and Rhineland campaigns. He endured some of the most horrific fighting of the war. In September of 1944 he was shot in Northern France and was severely injured again in November in the battle of Metz.

Mr. Irwin R. Gibson entered military service in April 1943 at age 18 and served in the 1203 Engineer Fire Fighting Group of the 34th Division. From October 1943 until November 1945 he fought in the Naples-Foggia, Rome-Arno, Southern France, and Rhinland campaigns. He landed in France with the invasion of Southern France, where he was protecting incoming supplies, and troops at the harbor. He experienced many bombings raids in particular in the city of Marseilles.

For his bravery, Mr. Gibson has received several military awards from the American Government, including the Bronze Star, the European, African, Middle Eastern Theater Medal with four Bronze Stars, the Good Conduct Medal, the WWII Victory Medal and the Purple Heart Medal for wounds received in Italy.

Mr. George B. Leach, entered military service in September 1943 at age 19, and served as Caporal in the 32nd Armored Regiment of the 3rd Division. He was a medium tank crewman 2736. From April 1944 until November 1945, he participated in the Normandy, Northern France, Rhineland, Ardennes, and Central Europe campaigns. With his division he helped liberate countless French cities as his unit fought its way across France and Europe.

For his bravery, Mr. Leach is the recipient of many prestigious awards from the U.S government, including the Bronze Star, the Distinguished Unit Badge, the European, African, Middle Eastern Theater Medal with five Bronze Stars, the Good Conduct Medal, the WWII Victory Medal and the Belgian Fourragère.

Check the photos of the ceremony on Coshocton Tribune


_ In Chicago on eterans Day, Deputy Consul General of France in Chicago, François Pellerin participated in the 88th Annual Bronzeville Veterans Day Parade on the South Side.

About 400 dignitaries, cadets, veterans and guests met at the Chicago Military Academy which served as host of the ceremony after early rain drove the parade indoors. The parade starts on 43rd and King Drive and proceeds north on king Drive to 35th St. where the Victory Monument is located. 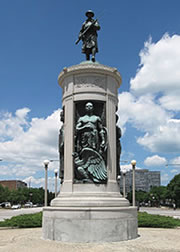 Mr. Pellerin paid tribute to the African-American soldiers from the 8th Illinois National Guard Regiment, which during the Great War came to be known as the 370th U.S Infantry Regiment and served with distinction with the French 34th, 36th, and 59th Infantry Divisions, earning streamers for the battles of Lorraine and Oise-Aisne.

Created by sculptor Leonard Crunelle, an American artist born in France, the Victory Monument was built to honor the Eighth Regiment of the Illinois National Guard, an African-American unit that served in France during World War I. During the Great War the regiment was reorganized as the 370th U.S. Infantry of the 93rd Division. The names of 137 members of the Eighth Infantry, who lost their lives during the war are inscribed on a bronze panel. The monument was erected in 1927 by the State of Illinois in the Chicago neighborhood known as "Bronzeville" on Martin Luther King Drive and 35th Street.


In Nebraska on November 11, Honorary Consul of France Cédric Fichepain was the guest of honor of Plattsmouth High School.

He paid tributes to the American veterans of WWI and WWII. He also gave a special recognition to the school which is the home of the Blue Devils, "today, in this school, in the home of the great Blue Devils we are also celebrating the long-standing French-American friendship. As you know your team bears the nickname of the elite French mountain infantry of the French army “The Chasseurs Alpins” or the alpine hunters 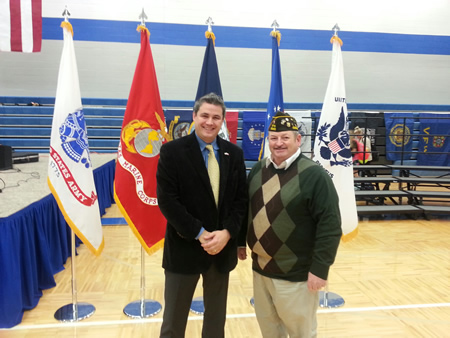 During WWI they were known for their combat tactics, endurance skills, their pugnacious and combative spirit, as well as for their distinctive blue uniform! [...]
In 1917, when the U.S entered war, units of the Blue Devils/Les Diables Bleus came to New York, Chicago and Washington helping raise money in the war effort. They became so famous that in the 20s many schools like yours adopted their nickname" end of quote.